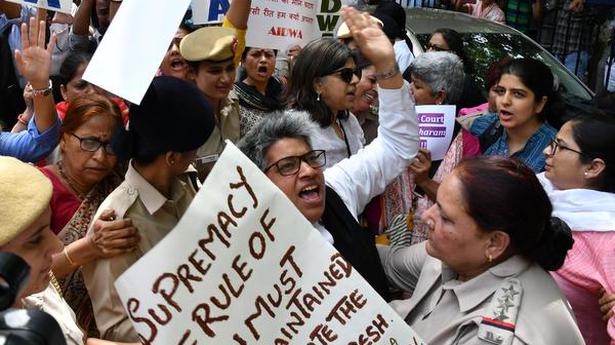 If Chief Justice of India Ranjan Gogoi is given a copy of the ‘confidential’ inquiry report, I should be provided with one too, the former apex court staffer wrote to the in-house panel, which found “no substance” in her sexual harassment allegations against the CJI.

“I have a right to know how, why and on what basis have your Lordships found my complaint to have ‘no substance’,” the complainant urged the Justice S.A. Bobde-led in-house committee on Tuesday.

“If a copy of the report is being given to the CJI directly or indirectly, I am entitled to a copy thereof in any case,” the woman appealed to the committee.

Copies of the report has been provided to Chief Justice Gogoi and Justice Arun Mishra, the fourth senior most judge in the Supreme Court.

Kept in the dark

She said it was “rather strange that the complainant in a case of sexual harassment is not to be provided with a copy of the report which finds her complaint to be without substance”.

She said the committee has found her allegations to be of no substance without bothering to let her know the reasons for their decision.

“The Sexual Harassment of Women at the Workplace (Prevention, Prohibition and Redressal) Act, 2013, in Section 13 provides that both parties have a right to receive a copy of the report. Not providing a copy to the complainant while holding her complaint to be unfounded would be a violation of the principles of natural justice and a complete travesty of justice,” her letter said.

She said the Supreme Court is relying on a judgment which pre-dates the Right to Information (RTI) Act of 2005 which mandates the fundamental right to information.

A short statement released by the Secretary General of the apex court on Monday referred to its 2003 judgment in the case of Indira Jaising versus Supreme Court of India to justify its decision that in-house procedural rules do not permit the contents of the inquiry report to be made public.

The complainant she quoted a full-bench judgment of the Delhi High court in the case of disclosure of assets of judges, saying “the full bench had held that even assets of judges would be accessible under RTI to any citizen”.

The complainant said she had been treated as an “outsider” from the very beginning of the inquiry process.

In the first place, she said, the committee did not even bother to even clarify to her whether the proceedings were in-house or not.

“However, the in-house proceeding rules are now being used to deny me and the public a right to the report,” she wrote.

“I have a right to the report, the reasons for the same as well as copies of the depositions of any witnesses, any other persons or any other evidence considered by the Committee,” she demanded in her letter.

Visakhapatnam Port, which commenced operations on October 7, 1933 with only three tiny jetties and a capacity to handle 1.3 lakh tonnes, is today aspiring to become a transhipment hub on the country’s east coast. The port, which has staved off stiff competition from neighbouring ports, owes its resurgence to various initiatives such as roping […]

New guidelines are in for e-tailors