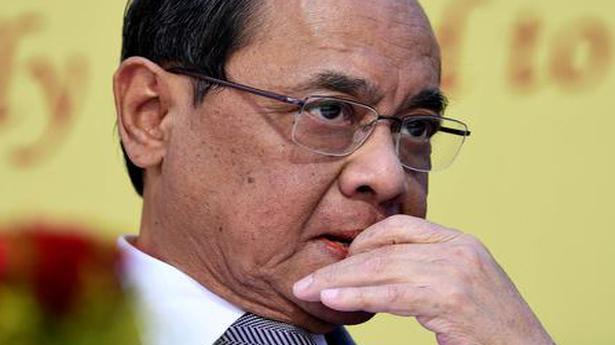 Soon after some women, including advocates, were detained outside the Supreme Court on Tuesday for protesting against the clean chit given to the Chief Justice of India (CJI) Ranjan Gogoi by an in-house committee that went into the sexual harassment charge against him, Bar Council of India (BCI) chairman Manan Mishra appealed to the members of the legal fraternity to “drop the episode from their minds” as the decision of the committee is “totally just and proper.”

In a statement, he said, “The committee has found no substance in the allegations against the CJI and the decision is totally just and proper. Judiciary is the only ray of hope for the poor people of the country, and the BCI, the State Bar Councils and the Bar Associations of the country believe in maintaining the dignity and sanctity of the judiciary.”

Mr Mishra highlighted some “glaring things” of the episode. “The manner is which she [complainant] claims to have recorded everything in her mobile while at the police station, and the way she has been dealing with the police, the courts, the CBI, the IB and everyone, if one analyses these things carefully you will find something fishy.”

Mr. Mishra said, “The committee has taken the decision after examining the materials and everything carefully, it has adopted the right procedure which is required in the case. We should not doubt the decision of our three-judge committee; otherwise it will send a very wrong signal and there shall be no end to such malicious complaints against the responsible authorities discharging important functions. We should not forget that the lady [complainant] had approached and lodged her complaint to the judges of the SC and not opted to lodge an FIR.”

He requested the members of the Bar to “drop this episode from their minds and the gossiping as it is causing serious harm to the institution.” He added, “One should imagine the mental agony suffered by a respectable man because of someone’s conspiracy to malign his image and to lay so much undue pressure upon him.”

Trinamool Congress supremo Mamata Banerjee on Saturday offered to quit as chief minister of West Bengal following her party’s drubbing in the Lok Sabha polls but the TMC rejected it. Addressing her first press conference after the election results were declared, she accused the BJP of polarising the people on religious lines to garner votes […]

Members of a fishermen association, affiliated to CITU, from Kadaladi block in Yerwadi union here on Monday alleged that a majority of mechanised operators in the district used engines made in China, which were not only banned, but also had higher horse-power. Submitting a memorandum to Collector K. Veera Raghava Rao here on Monday at […]

Inspector General of Police Abdur Rahman, currently posted with the State Human Rights Commission, on Wednesday announced his resignation from the service in protest against the Citizenship (Amendment) Bill. Speaking to The Hindu, Mr. Rahman said, “The Bill itself is against the basic structure of the Constitution which is equality before the law. If you […]