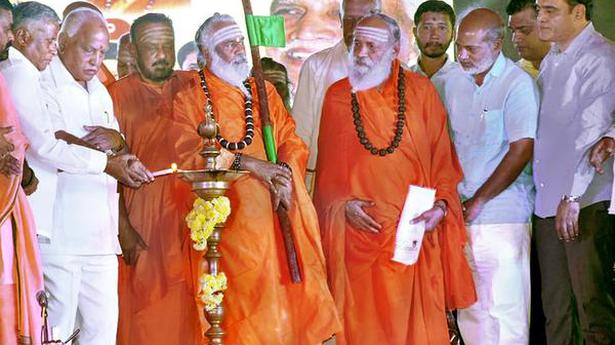 Speaking after inaugurating the ‘rajagopura’ of the temple, he had a word of praise for the natural beauty of the region and said he would allot the funds needed for development of the pilgrim centre.

Mr. Yeddiyurappa said that mutts had played an important role in the survival of religion and culture and that the purpose of Veerashaiva-Lingayat religion was mainly for the uplift of Dalits and backward classes.

The Chief Minister said the State Budget scheduled to be presented on March 5 will give priority to farmers.

It will also come up with programmes for the growth of the industrial sector.

A host of seers including Renukashivacharya Swamiji of Balehonnur’s Rambhapura Peetha participated in the programme.

‘It can be of great use to administrators’ Source: thehindu.com Related

Morning Digest: Divergences remain between India and China despite 5-point plan, eight students from Telangana among 24 toppers of JEE Mains, and more

Failure to prove conspiracy led to acquittal of Kowsalya’s father