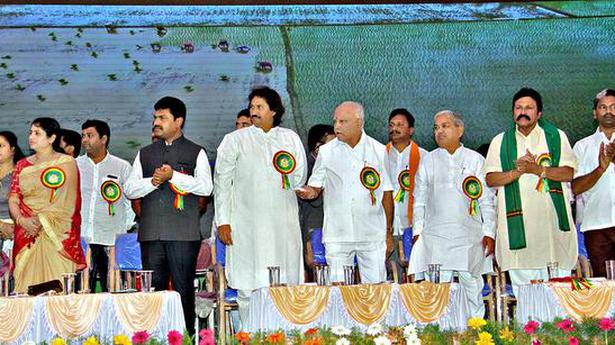 Chief Minister B.S. Yediyurappa has promised to take up measures to upgrade Anavatti Gram Panchayat in Sorab taluk into a town panchayat.

After kick-starting works on Mudi and Mugur lift irrigation projects in Anavatti on Monday, Mr. Yediyurappa said that Anavatti, which is well connected with a network of roads, has emerged as a buzzing commercial centre in recent times. The upgrade of Anavatti into a town panchayat could result in the creation of necessary civic amenities for the residents and for the farmers who visit to sell their agriculture produce, he said.

Mr. Yediyurappa directed officials of the Department of Water Resources to take measures to complete the irrigation projects in a year. He said that, quality should be maintained when laying pipelines to provide water to agricultural lands under these projects. The completion of Mudi and Mugur lift irrigation projects will provide drinking water to the drought-affected villages in Sorab taluk and irrigate the agriculture land here, he said.

Mr. Yediyurappa also said that work on constructing a bridge across the Sharavathi backwater to connect Kalasavalli with Ambaragodlu and work related to the construction of an airport on the outskirts of Shivamogga city had already commenced.

Kumar Bangarappa, MLA for Sorab, requested the Chief Minister to sanction funds for the upgrade of amenities for pilgrims in Chandragutti. He requested the Union government to give approval for the project to provide railway connectivity between Sorab and Hubballi via Anavatti and Tadasa.

Onus of completing Polavaram is on YSRCP: GVL

The State government should ensure that the Polavaram project was completed on time without any cost escalation, BJP national spokesman and Rajya Sabha member G.V.L. Narasimha Rao said here on Saturday. The BJP was not bothered about which contractor executed the national project, he told the media. But the YSRCP government, which had called for […]

The formation of a low pressure area over the north Bay of Bengal is likely to result in an increase in rainfall activity over Kerala in the next few days. The India Meteorological Department has issued a heavy rainfall warning for Kerala for the next four to five days. A special weather bulletin issued on […]

‘Water bell’ in schools gets a boost

In an attempt to boost the ‘water bell’ initiative, an NGO has undertaken distribution of water bottles at two Zilla Parishad High Schools (ZPHS). The distribution was carried out at the ZPHS at Venavanka in Karimnagar district and at Suraram village in Warangal (Urban) since the two schools have also started water bell following instructions […]