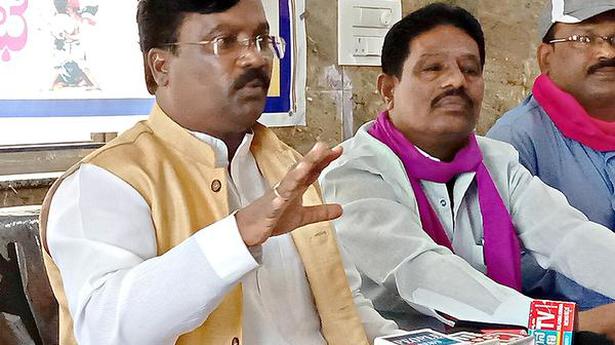 Exerting pressure on the State government to recommend the implementation of the A.J. Sadashiva report to the Union government for giving internal reservation to Scheduled Castes, a committee formed to see the fulfilment of the demand has urged Chief Minister B.S. Yediyurappa to meet the requirement before the by-elections.

Addressing presspersons here on Sunday, State president of the Coordination Committee demanding implementation of the report Muttanna Bennur said that the committee has lots of hopes from the BJP government as it was the same government that had constituted the committee in 2012.

Accusing the former Chief Minister Siddaramaiah of creating a rift within the different sub-castes of Dalits by not implementing the report during his tenure as Chief Minister, he said that the Congress government lost in the elections because the Dalits were upset with the Congress.

“He (Siddaramaiah) keeps claiming to be a follower of B.R. Ambedkar and Basaveshwara, but in reality he is the one who tried to divide Dalits and created bickering between Dalits and Banjaras who are against the implementation of the report,” he said.

To a question, he said that several misconceptions on the report have developed as it has not been made public. This misconception is leading to a rift between Dalits and Banjaras.

He said that 52 sub-castes of Dalits are united in their demand and are trying to convince the Banjaras of the need to not oppose the report. “We will also be cautioning the Banjaras that even after that, if they continued to oppose the report, then we will have to launch an agitation against the community itself,” he said.

In his address, State working president of the committee Ambanna Arolikar said that the only work now the State government has to do is to submit the report to the Union government recommending its implementation.

“It is shameful on the part of the successive governments in the State that they kept us deprived of our right. At least, the BJP should not delay it any longer,” he said.

He said that the committee has been holding consultations with leaders on the future course of action if the BJP government fails to meet the demand.

A court here has ordered to attach the property of all six accused in a Muzaffarnagar riots case as they failed to surrender before it despite repeated arrest warrants. The accused had allegedly stabbed a youth, Shahnawaz, to death at Kawal village in Muzaffarnagar on August 27, 2013. The accused have been identified as Ravinder, […]

The Ministry of Home Affairs (MHA) confirmed on Saturday that it has transferred the probe into the 2018 Bhima-Koregaon incident to the National Investigation Agency (NIA). Maharashtra Home Minister Anil Deshmukh on Friday night condemned the Centre’s decision to hand over the investigation of the Bhima-Koregaon violence to the NIA. “I strongly condemn the Centre’s […]

NCP leader Mani C. Kappan was sworn in as an MLA of the Kerala Assembly in a brief ceremony held here on Wednesday. Speaker P. Sreeramakrishnan administered the oath of office to Mr. Kappan, who, as Left Democratic Front (LDF) candidate, had defeated Jose Tom Pulikunnel of the United Democratic Front (UDF) in the September […]