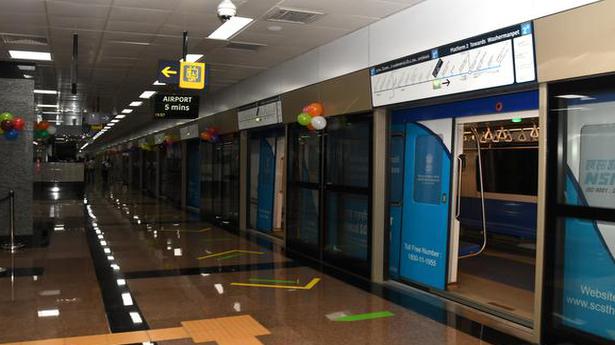 In a statement, the CMRL said it was found that three non-executive staff members — R. Manokaran and K. Prem Kumar, traffic controllers and Cynthia Roshan Samson, depot controller — were controlling the entire train movement of both Corridor 1 and 2 on April 29.

They had deserted the work place and halted the trains by giving false critical command in the signalling system to disturb/hamper the Metro train services intentionally. The CMRL had placed them under suspension for sabotage of the operational services. An enquiry will follow, the officials said.

A coffee table book on Kukkarahalli Kere in the city was released on Wednesday to create greater public awareness on the imperatives of conserving the lake and the environment. The book, published by Mysore Grahakara Parishat (MGP) in association with Wild Mysuru, was released by students of Environmental School Warden Project of Kautilya Vidyalaya who […]

Mugilan discharged from hospital, remanded and taken to Karur

Environmental activist Mugilan, who was arrested by CB-CID police in connection with the rape of a woman, was produced before Chief Metropolitan Magistrate Court on Tuesday. R.Mugilan was reportedly spotted at Tirupathi ailway station on Saturday, almost 140 days after he went missing. He was brought to Katpadi, Vellore by the Railway Protection Force and […]