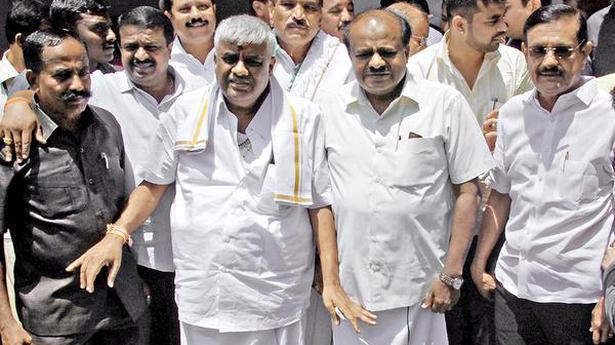 The growing support for Sumalatha, who is contesting the Lok Sabha election from Mandya as an Independent, appears to be compelling coalition government partners — Janata Dal (Secular) and Congress — to put up a united show.

Top JD(S) leaders from the district and some local Congress leaders, who were abstaining from electioneering for the JD(S) nominee, Nikhil Kumaraswamy, jointly appeared before mediapersons here and said they would work in unity to ensure his victory.

Mr. Nikhil Kumaraswamy would file his nomination papers on March 25 and at least two lakh supporters will attend a road show, said C.S. Puttaraju, Minor Irrigation Minister and JD(S) leader. The former Prime Minister H.D. Deve Gowda, Chief Minister H.D. Kumaraswamy, his wife and Channapatna legislature Anitha Kumaraswamy, KPCC president Dinesh Gundu Rao and several senior Congress leaders would attend the road show. Local Congress leaders would campaign for the candidate, he said. Mr. Puttaraju added, “We will seek votes based on the development programmes of the coalition government and we will take Congress leaders into confidence to win the election.”

Even as the Ramagundam Fertilizers and Chemicals Limited (RFCL) is being revived and ready for commercial production in March 2020, the employees associated with the closed Fertilizer Corporation of India (FCI), Ramagundam have urged the Union government to provide them a dignified pension scheme for a living. Several hundreds of employees of Ramagundam FCI, who […]

The Congress on Monday approached the Election Commission (EC) against Prime Minister Narendra Modi’s comment on former Prime Minister Rajiv Gandhi describing him a ‘bhrashtachari [corrupt] number one’ at a rally in Uttar Pradesh last week. Submitting the memorandum to the EC, Congress leader Abhishek Manu Singhvi said the poll panel must decide on the […]

They have been asking for financial relief; the Minister has not made any promises Source: thehindu.com Related