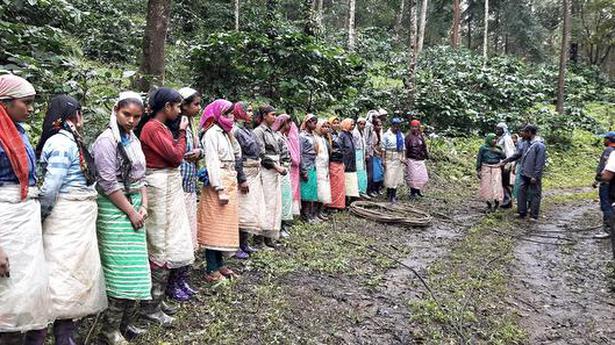 The workers’ quarters in most coffee estates in Hassan and Chikkamagaluru have become empty. Thousands of people from Assam, Odisha, West Bengal, and other States, working on the estates of Sakleshpur, Alur and Belur taluks, have gone back to their native places to cast their votes.

Assam will go to polls in three phases, while in West Bengal the elections will be held in seven phases, and in Odisha it will be in four phases. The workers who left about three weeks ago are expected to return only after the poll results are out.

At least 15,000 people from these three States are working in the estates.

Their entry into the estates began about 15 years ago and now they have spread across the three coffee growing districts: Kodagu, Chikkamagaluru, and Hassan.

The workers from Assam do not miss a chance to vote back home.

“You can believe it or not, but there were around 65 people from Assam in our Hasirugudda estate. Not even one of them is left here,” said B.N. Jagadish Shetty, manager of an estate of India Builders Corporation, near Arehalli in Belur taluk.

After the draft of the National Register for Citizens (NRC) was released in Assam on July 30, 2018, workers from there were worried as the names of some among them were missing.

There were instances of the names of the younger members in the family missing in the draft, while their parents had got into the list.

“As the issue of citizenship has gained significance after the draft of NRC, these people do not wish to miss a chance to vote. They want citizenship and other facilities back home,” Shetty added.

The lack of employment opportunities back home is why they travel a long distance to earn a living.

C.S. Mahesh, president of Hassan District Planters’ Association, told The Hindu: “This is the time when there is hardly any work on the estates. A few skilled labours will be hired for pruning and shadow treatment works. People from Assam, who are unskilled labourers, may return to the estates by the end of May or early June”.

In recent years, people from many north Karnataka districts also work on the estates. They too have gone back to their native places for the elections.

The recent sights of Chief Minister and the All India Anna Dravida Munnetra Kazhagam (AIADMK)’s co-coordinator, Edappadi K. Palaniswami entering a field to plant paddy as well as arriving at an event on a bullock cart in Tiruvarur district appears to give the impression of his keenness on donning the role of a “farmer.” Also […]

Congress leader Hardik Patel, who walked out of the Sabarmati central jail here on Thursday, a day after he was granted bail in a sedition case, was immediately arrested by the Gandhinagar district police in a 2017 case of addressing a rally without police permission, an official said. A local court in Ahmedabad had on […]