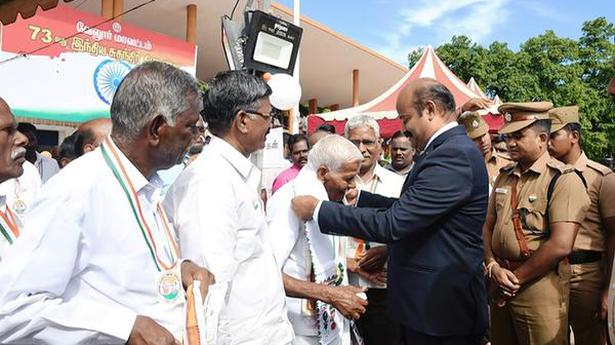 The 73rd Independence Day was celebrated with fervour in Vellore and Tiruvannamalai districts on Thursday.

In Vellore, Collector A. Shanmuga Sundram unfurled the tricolour and reviewed the guard of honour at Nethaji Stadium. He honoured two freedom fighters and their 50 family members in recognition of their contributions.

Earlier, the Collector hoisted the tricolour at the rampart of Vellore Fort and paid floral tributes at the Mahatma Gandhi statue at tne entrance of the campus.

In Tiruvannamalai district, Collector K.S. Kandasamy hoisted the tricolour. He handed over merit certificates to 174 government officers, employees and representatives of NGOs.

Delivering his speech after hoisting the national flag at VIT, Vellore, Chairman, State Official Language (Legislative) Commission, Justice P. Kalaiyarasan said in British India, the people identified themselves with princely States where they lived. But they were united in their fight against the British empire. As Indians we have more responsibility to save and cherish the glory of India, he added.

Pakistan has formally called for an emergency meeting of the UN Security Council (UNSC) to discuss India’s move to revoke the special status to Jammu and Kashmir, Foreign Minister Shah Mahmood Qureshi said on Tuesday. In video message, Mr. Qureshi said that he sent a formal letter to the president of the UNSC through Permanent […]

Union Minister and senior BJP leader Piyush Goyal on Sunday said the Congress party’s promise of a minimum income scheme for poor is a “disaster” in its design itself and could lead to another “scam” as selection of beneficiaries would be full of corruption. Mr. Goyal said he feels it will not be possible to […]

The Red Notices issued against Neeshal and Nehal, brothers of Nirav Modi, the “mastermind” of the Punjab National Bank fraud, are not available on the Interpol website anymore. It is not clear whether the notices have been executed or withdrawn. The CBI’s website, which also maintains a list of the wanted persons against whom Interpol […]