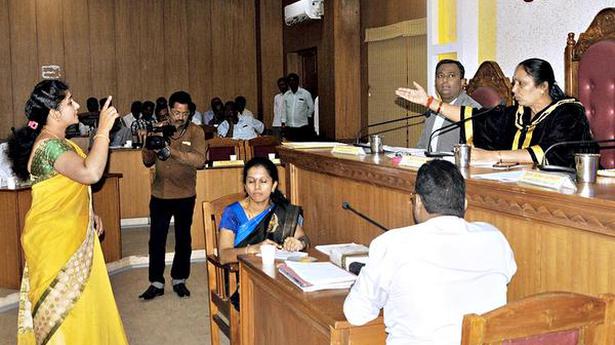 Congress and Janata Dal (Secular) members created a ruckus at the meeting of Shivamogga City Corporation on Friday against the delay in construction of houses for slum dwellers.

H.C. Yogish (Congress) alleged that though the work of construction of 650 houses under Pradhan Mantri Awas Yojana began at Shanti Nagar and Subhash Nagar 18 months ago, there has been inordinate delay in its completion.

B.A. Ramesh Hegde, another member, expressed ire that though it was decided to complete the construction work in six months, there has been delay in handing over the houses to the beneficiaries owing to official negligence.

Jyothi, officer, Karnataka Slum Development Board, said construction of 398 houses was taken up in the first phase of which the work related to 216 houses has reached the final stage. As some beneficiaries have failed to furnish the required documents to the banks, there has been delay in sanctioning of loan for them resulting in corresponding delay in execution of the construction work.

Village Revenue Officers serving in Bandar Revenue Division staged a sit-in here on Friday, demanding that the district authorities provide police protection for the execution of eviction exercise in future. The VROs under the banner of the APVROs Association (APVROA) and Government Employees Association (Eastern Krishna) staged the protest in front of the Bandar Tahsildar […]

Scaling down the scare of a potential Nipah outbreak, four out of 11 persons who were kept at an isolation ward of the Government Medical College, Ernakulam, were shifted to the observation ward on Saturday after their condition improved significantly. The condition of the remaining seven persons in the isolation ward was also reported to […]

Will wait till SC verdict on Sabarimala: CM

The State government will wait for the Supreme Court verdict to allow women of all ages to offer worship at the Ayyappa temple in Sabarimala, Chief Minister Pinarayi Vijayan has said. He was replying to a question at a press conference in the Secretariat here on Saturday on the alleged conspiracy over the arrival of […]