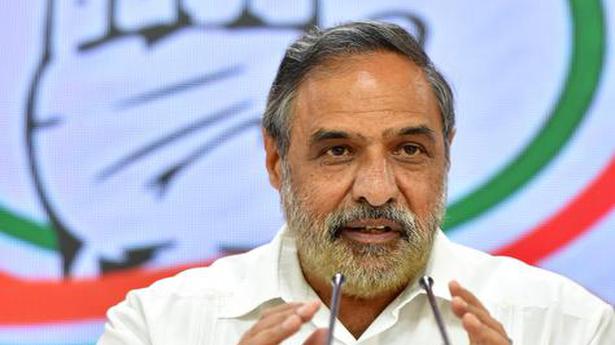 The Congress has accused Prime Minister Narendra Modi of violating Indian foreign policy’s “time honoured principle” of not interfering in the domestic elections of another country by campaigning for U.S. President Donald Trump at the ‘Howdy, Modi’ event in Houston.

In a series of tweets, Congress senior spokesperson Anand Sharma said Mr. Modi was in the U.S. as India’s Prime Minister, and not a “star campaigner” in the U.S. elections.

“Mr Prime Minister, you have violated the time honoured principle of Indian foreign policy of not interfering in the domestic elections of another country. This is a singular disservice to the long-term strategic interests of India,” Mr. Sharma said on Twitter after the ‘Howdy Modi’ event in Texas on Sunday night.

“Our relationship with the United States of America have throughout been bipartisan, vis-a-vis Republicans and Democrats. Your actively campaigning for Trump is a breach of both India and America as sovereign nations and democracies,” he added.

Mr. Sharma’s party colleague, P. Chidambaram, who is in Tihar jail on charges of alleged corruption, also took a dig at Mr. Modi over his “Everything is fine in India” remark in Houston.

“Bharat mai sab achha hai (Everything is fine in India). Except for unemployment, loss of existing jobs, lower wages, mob violence, lockdown in Kashmir and throwing Opposition leaders in prison,” Mr. Chidambaram tweeted through his family.

A day after the National Investigation Agency (NIA) raided its offices in Tamil Nadu, radical outfit Popular Front of India (PFI) on Friday alleged that the agency was targeting Muslims and trying to link “social” outfits like PFI with terrorism. The PFI Tamil Nadu unit president M. Mohamed Ismail charged the NIA with targeting Muslims […]

Barely two days after he abruptly exited the Congress, Aurangabad legislator Abdul Sattar on Monday denied reports of him joining the Bharatiya Janata Party (BJP) and claimed that State Congress chief Ashok Chavan has promised him a Lok Sabha ticket for either the Aurangabad or Jalna seat. If his claim is true, the Congress will […]

Janata Dal (Secular) supremo H.D. Deve Gowda and the former Chief Minister Siddaramaiah will tour all the 28 Lok Sabha constituencies in the State from April 8 and campaign for the coalition candidates. Mr. Siddaramaiah said on Friday that all workers and leaders of the Congress and the JD(S) have to work towards defeating the […]