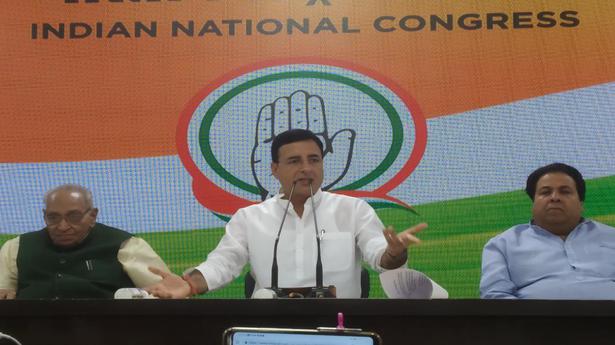 The Congress has challenged the Central government to order an investigation by the newly-appointed Lokpal into the ‘Yeddyurappa Diaries’ published by a news magazine.

At a media conference in New Delhi, Congress spokesperson Randeep Singh Surjewala sought a response from the government on The Caravan report.“The Prime Minister must come out whether he is ready to get this investigated,” he said.

Mr. Surjewala claimed that the I-T department approached Union Finance Minister Arun Jaitley to find out whether there should be an inquiry but nothing happened. ”We are not here to do mudslinging like the BJP. We are here to tell people,” he said.

Houses for all Life Mission beneficiaries in 3 months, says Minister

E.P. Jayarajan, Minister for Industry and Commerce, said here on Sunday that all eligible persons under the Life Mission Housing Scheme would get their own houses within the next three months. After inaugurating the family meet and adalat of Irikkur block panchayat Life Mission beneficiaries, he said the government was aiming at a homeless-free Kerala. […]

The Madras High Court on Friday agreed to hear on Saturday, a working day for the court, a plea for the constitution of a special investigation team by Election Commission to inquire into the issue of alleged unauthorised entry of a woman Tahsildar into a document storage room adjacent to a strongroom housing electronic voting […]