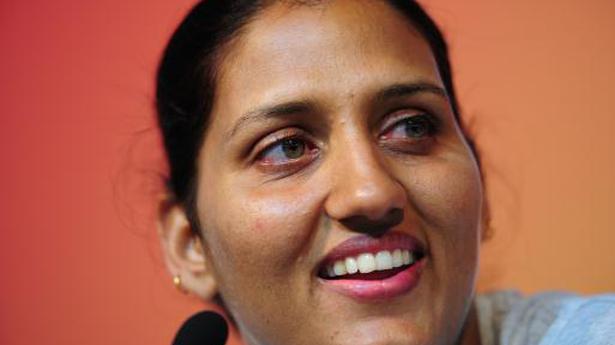 The Congress on Monday fielded Olympian discus thrower Krishna Poonia from the Jaipur Rural constituency as it released another list of nine candidates for the Lok Sabha polls.

With this, the Congress has so far announced the names of 325 candidates for the upcoming general election.

Ms. Poonia, a three-time Olympic participant, is the MLA from the Sadulpur constituency in Rajasthan.

She will contest against Union Information and Broadcasting Minister and Olympic medallist Rajyavardhan Rathore, who is the Jaipur Rural MP.

Of the nine candidates the Congress named on April 1, six are from Rajasthan, two from Maharashtra and one from Gujarat.

The party has fielded Mohan Joshi from Pune, a seat which was earlier represented in the Lok Sabha by tainted Congress leader Suresh Kalmadi.

Ms. Poonia had won the gold medal in discus throwing in the 2010 Delhi Commonwealth Games..

There is a need for an interfaith movement for world peace, former Union Minister Karan Singh said here on Wednesday. He was speaking at the ‘World Parliament of Science, Religion and Philosophy’ organised by the MIT World Peace University to mark Mahatma Gandhi’s birth anniversary. What we need today is an “inter-religious movement for world […]

One injured in elephant attack

A person suffered serious injuries in an elephant attack at Maradikere in Yeslur range of Sakleshpur taluk on Tuesday morning. Raju, 60, has been admitted to Hassan Institute of Medical Sciences. Sivaram Babu, Deputy Conservator of Forests, told The Hindu that a few elephants had entered Yeslur range from Kodagu. “It seems one of them […]