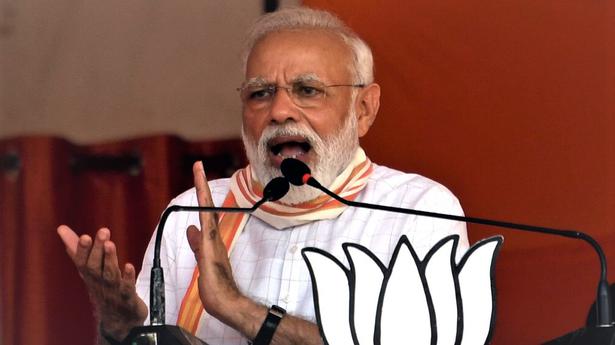 Prime Minister Narendra Modi on Wednesday alleged that the Congress and its supporters have never hesitated to make derogatory remarks against his caste. He accused the Congress of insulting the backward castes with its ‘watchman is the thief’ poll slogan.

“The Congress says chowkidar chor hai…While I can bear all the insults hurled at the Congress at me, they have insulted the backward communities by dubbing them as thieves.” The Congress of incapable of showing any sensitivity towards Dalits and socially backward people, he said.

The Prime Minister was addressing a rally at Akluj in Solapur district of Maharashtra which saw estranged Nationalist Congress Party (NCP) leader and Madha MP Vijaysinh Mohite-Patil sharing the stage with him.

Mr. Modi presented a bouquet of flowers to Mr. Patil, 75, as a mark of respect for the latter’s completion of 50 years in politics.

Praising the veteran NCP leader, a influential sugar baron from Akluj, Mr. Modi said: “I consider myself fortunate to be able to congratulate Vijaysinh Mohite-Patil on completing 75 years and 50 years in politics. He has worked tirelessly for Maharashtra and the country.”

Mr. Modi attacked NCP chief Sharad Pawar for the latter’s remarks against him that he [Mr. Modi] does not understand the importance of family. “I draw my inspiration from the concept of the family. Revolutionaries like Bhagat Singh, Rajguru, Sukhdev had families… Mahatma Phule, B.R. Ambedkar, Veer Savarkar had families. I derive my inspiration from their families,” he said.

“If only you had taken inspiration from Y.B. Chavan’s family, you might have understood the importance of a family… But your model is a special family [the Gandhi-Nehru family] in Delhi. You only seem to want to learn from them,” he said.

Mr. Modi’s address formed the cornerstone of the BJP’s bid to breach the NCP’s bastions – the Madha and the Baramati Lok Sabha constituencies. The BJP-led ‘mahayuti’ has fielded ex-Congressman Ranjitsinh Naik-Nimbalkar and Kanchan Kul in Madha and Baramati respectively.

Mocking the NCP chief’s decision of not contesting from Madha, Mr. Modi said: “I now realize why Sharad Pawar left the [poll] field and took to his heels. He is a wily player who thinks carefully before acting… He never does anything that would affect him or his family. It does not matter whether someone else [another candidate] is sacrificed,”

Mr. Modi alleged that Mr. Pawar “never cared” for farmers; he only cared for his sugar factories.

“The PM Kisan Yojana will be substantially expanded once we come to power after the election and there will be a separate water ministry to bring relief to water scarce areas like Madha. Water is not merely a political weapon to be used opportunistically,” he stated.

Mr. Modi accused big leaders of the NCP and the Congress of failing to resolve the problems of Maharashtra’s arid regions for several decades.

“You have seen how I have run the government for five years. Now you have to decide whether you want to see a strong country or a weak one. Do you want a majboot [strong] Hindustan or a majboor [weak] one,” he asked.

No one had been able to point fingers at the BJP over corruption, he claimed. “Though I cannot stop tongues spewing lies in Delhi [read accusations by the Congress].” The Opposition, he alleged, had only a one-point agenda – ‘Modi hatao’ (remove Modi) for the election.

“All their [opposition parties] speeches from West Bengal to Baramati to Madha are the same, one-note refrains about removing one man [read Mr. Modi]… They have no vision of a future India in their manifestos,” claimed Mr. Modi.

Reiterating yet again the NDA’s ‘strong’ response to terror strikes, he said: “Today, after a terror attack, we enter [the terrorists’ lairs] and kill them. I won’t let their [terrorists’] conspiracies be a success.”

While he is still nominally with the NCP, the elder Mohite-Patil had assured Mr. Naik-Nimbalkar that he would actively campaign for his – and the BJP’s – victory in Madha.

Speaking on the occasion, Chief Minister Devendra Fadnavis said, “The NCP’s opening batsman, Mr. Pawar went back to the pavilion after the public unanimously said they would vote for Mr. Modi. No one can now stop the lotus [the BJP symbol] blossoming in Madha.”

Mr. Modi was previously slated to hold a rally in Baramati, the stronghold of the Pawar clan.

In Mr. Modi’s stead, BJP national president Amit Shah is now likely to hold a rally on April 19 as part of campaign for Kanchan Kul, the candidate fielded by the BJP-Sena coalition.

Maharashtra Chief Minister Devendra Fadnavis has told the depositors of the scam-hit PMC Bank that he would discuss the issue of their distress with Prime Minister Narendra Modi when he meets the latter on October 13. A group of Punjab and Maharashtra Cooperative (PMC) Bank customers met Mr. Fadnavis on Friday after an election rally […]

Work on modern bus station in Khammam to pick up soon

After facing initial hiccups due to lack of proper coordination, work on the “ultra modern” new bus station, proposed at an estimated cost of ₹ 25 crore in a sprawling 7.5-acre NSP land close to the bypass in the town, is all set to pick up pace. The most sought after new bus station, which […]

With the police taking the COVID-19 lockdown seriously, the number of people found riding riding bikes has come down drastically in the last 24 hours all over the district, particularly in the rural areas. While the police personnel mounting a strict surveillance on the the movement of people on the highways, people in rural areas […]