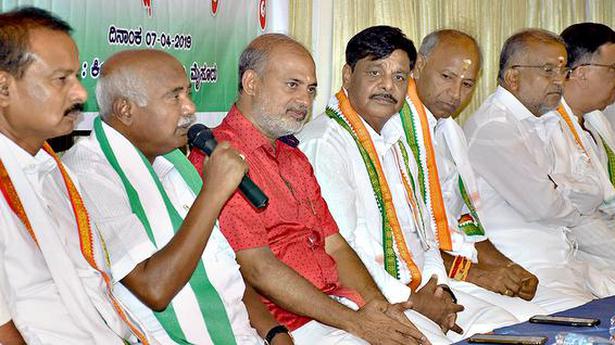 Seeking to dispel doubts over mistrust among the coalition partners in Mysuru region, leaders of the Congress and JD(S) finally came together on Sunday to address a press conference and display their unity against the challenge posed by the BJP.

Senior leaders of both parties from the region including JD (S) State unit president A.H. Vishwanath, Ministers G.T. Deve Gowda and S.R. Mahesh, besides former Ministers H.C. Mahadevappa and Tanveer Sait turned up for the conference at a private hotel in Myusu and pledged to work together in the Lok Sabha elections.

Mr. Vishwanath hoped that the display of unity would draw the curtains on speculation over the lack of understanding between the two parties.

The conference comes after days of speculation over a possible absence of will and inclination among leaders and workers of the JD(S) to work for the victory of Congress candidates C.H. Vijayshankar in Mysuru and R. Dhruvanarayan in Chamarajanagar. The manner in which a joint press conference convened on March 24 was called off the eleventh hour added to the misgivings. Mr. Mahadevappa clarified that the March 24 conference had to be called off because the Congress leaders were unable to contact the JD(S) leaders in time. Mr G.T. Deve Gowda said the date for the press conference was finalised at a meeting he held with Congress leaders.

He said the leaders of both parties, who had fought against each other in the elections, were in the process of ironing out differences. He said he and former Chief Minister Siddaramaiah too had not spoken after the Assembly elections, but held a discussion for one and a half hour recently.

Referring to the chaos at a recent meeting of JD(S) workers of Chamundeshwari Assembly constituency, he said he was in favour of party workers being allowed to express their views in a democratic set-up. “Only after they expressed pent-up feelings, would they listen to party leaders,” he reasoned and expressed confidence that the party’s rank and file will fall in line with the leaders’ directions.

As his helicopter lands on Nawada’s IIT Maidan, Tejashwi Yadav’s supporters quickly check if all the essentials are in place-water bottle on the table, a white towel on the chair and marigold garlands to greet their young leader. Tejashwi is an hour late. But his audience of some 2,500 people has been waiting patiently. The […]

The Art of Stillness | Luxury Special

Tourism by definition is an unsustainable activity and luxury travel even more so. There is no place one can go to without burning copious amounts of fossil fuel. Add to this the excesses that are passed off as luxury and it isn’t surprising then that every trip, stay and exploration is carbon negative. However, given […]