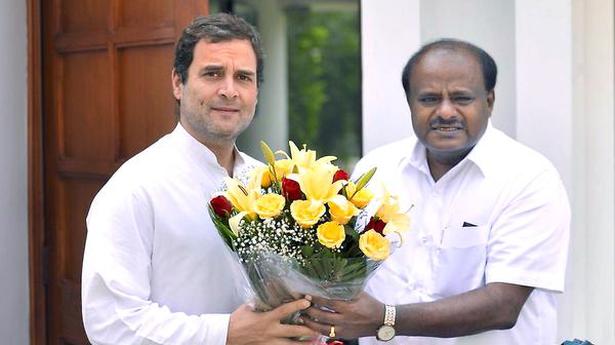 The wrangling over seat-sharing between Karnataka’s ruling coalition partners — the Janata Dal (Secular) and the Congress — has finally came to an end with the Congress agreeing to cede eight of the 28 Lok Sabha seats in the State to JD(S), including the Tumakuru seat that it holds.

The deal has been finalised in Kochi after talks between Congress president Rahul Gandhi and JD(S) General Secretary Danish Ali.

As per the deal, JD(S) gets Hassan, Mandya, Bengaluru North, Udupi-Chikamagalur, Vijayapura and Uttara Kannada. The party also gets to contest from Shivamogga, which the Congress had ceded to JD(S) in the recently bypolls. Currently, Tumakuru seat is represented by Congress leader S.P. Muddahanume Gowda, while JD(S) represents Hassan and Mandya.

The family of martyred Central Reserve Police Force (CRPF) jawan H. Guru here on Saturday rubbished media reports of “differences in their family over donation amount”. According to reports in some sections of the media, the family had received donation/compensation amount of ₹12 crore to ₹15 crore after the death of Mr. Guru. The soldier, […]

The Supreme Court on Thursday will hear a petition filed by the daughter of former Jammu and Kashmir Chief Minister Mehbooba Mufti, seeking permission to meet her mother who has been under detention since August 5. The former Chief Minister has been under detention since the Centre imposed a clampdown in Jammu and Kashmir following […]

BSP supremo Mayawati on Friday demanded that Rajasthan Chief Minister Ashok Gehlot be sacked in the wake of death of over 100 infants in a Government-run hospital in Kota. The former U.P. Chief Minister charged that Mr. Gehlot was making political statements that were irresponsible and unsympathetic. “This is highly shameful,” she said in a […]