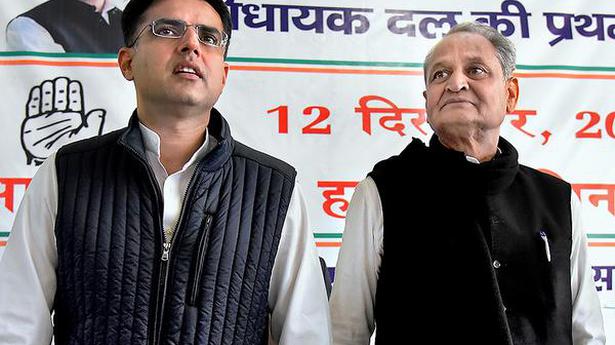 The Congress on Thursday kick-started its Lok Sabha election campaign in Rajasthan from Sikar and Tonk districts where it slammed the BJP for its stance of branding as “anti-national” anyone questioning the government’s policies and seeking answers on the issues directly affecting the common people.

Chief Minister Ashok Gehlot said at a public meeting in Sikar’s Laxmangarh town that Prime Minister Narendra Modi had lowered the dignity of his office by his conduct. “If Mr. Modi is elected again, no one knows whether parliamentary democracy will survive in our country. Any future elections under him are going to be a farce,” he said.

Mr. Gehlot was joined by Deputy Chief Minister Sachin Pilot and All India Congress Committee general secretary Avinash Pande at the rallies, first in Laxmangarh and later in Tonk’s Niwai town. Mr. Gehlot said the Prime Minister had been “exposed” in the Rafale deal case and had failed to fulfil any of his promises made in 2014.

“The air strikes by the Indian Air Force in Pakistan have not changed the political atmosphere in BJP’s favour. This is a propaganda of the Rashtriya Swayamsevak Sangh, which is trying to exploit the valour of our Armed Forces for the BJP’s advantage,” Mr. Gehlot said.

At the public meeting in Niwai, Mr. Gehlot highlighted the work performed by his government in the three months since it was elected to power. He said that major decisions such as farm loan waiver, release of unemployment allowance and restarting of his previous regime’s scheme for free medicines and diagnostic tests had extended relief to people.

Mr. Pilot said the Congress was seeking votes on the basis of its work and called upon the people of the State to support the party and make Rahul Gandhi the next Prime Minister.

He said the “culture of conflict and hatred” promoted by the BJP would disintegrate the country.

Mr. Pande said the Congress would hold 75 big rallies and 400 block-level public meetings across Rajasthan prior to the two-phase polling on April 29 and May 6. He said each committee constituted for elections had been assigned with specific tasks to ensure victory for the Congress.

No formal proposal yet from Centre on advisory council, says JKAP’s Mir

The advisory, if constituted, will for the first time enable a local face to oversee governance issues in Jammu & Kashmir. Source: thehindu.com Related

₹3,000 each credited to accounts of parents Source: thehindu.com Related