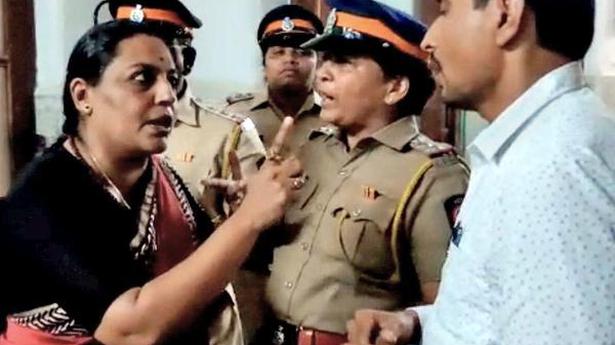 Senior Congress leader Yashomati Thakur had a heated argument with Mumbai police and doctors on Friday after she was stopped from meeting Shrimant Patil, the party’s MLA from Karnataka who has been admitted to the State-run St. George Hospital.

Mr. Patil had complained of chest pain and subsequently admitted to the hospital’s VIP room on the ground floor. While the hospital does not have a cardiac care facility or a specialist, Ms. Thakur questioned the line of treatment to the MLA.

“I am secretary in charge of Karnataka. I helped this man win the election, and naturally, I wanted to see the condition of our party MLA since he has come to Mumbai complaining of chest pain. But I was not allowed to meet him,” said Ms. Thakur, who is also a Congress MLA from Amravati district. “I was ready to take him to a better hospital for treatment. But his son, who was standing outside the ward, did not let me in. I met the dean and the superintendent of the hospital but the police did not allow me to go further,” she told The Hindu.

Commenting on the quarrel in the hospital, Ms. Thakur said the MLA and his son used to call her to seek ministerial berth. “Now they are not even allowing me to meet him. Of course there were heated exchanges,” she said. In a video that has been circulated on social media, Ms. Thakur can be seen accusing the doctors and the police of protecting Mr. Patil.

C.P. Chandrasekhar of the JNU’s Centre for Economic Studies and Planning on Tuesday said that he had resigned from a government panel set up to review India’s economic statistical data as he did not “trust the government to come up with a robust and transparent plan to restore the credibility of the statistical system which […]

According to data from State governments the number of deaths due to COVID-19 stands at 28 deaths, with 1,035 positive cases. Of this, as many as 921 cases are active ones. The coronavirus has claimed over 26,000 lives and infected at least 5,75,000 people across 201 countries, according to the WHO. The outbreak has been […]