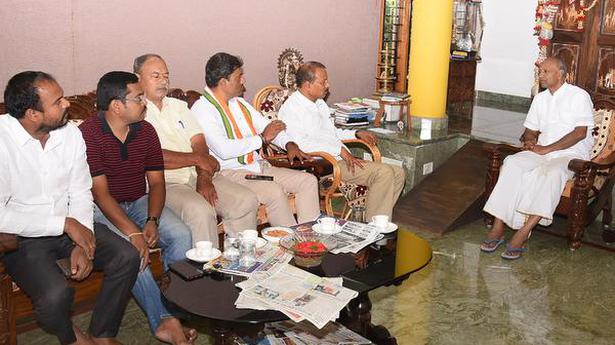 A delegation of Congress leaders called on former MP C.H. Vijayshankar at the latter’s residence in Mysuru and urged to reconsider his move to return to the BJP fold.

The delegation led by former MP R Dhruvanarayan met Mr Vijayshankar on Sunday and sought to remind him that the Congress party had fielded him as its candidate from Mysuru Lok Sabha seat earlier this year at a crucial time, risking its understanding with JD (S).

Mr Vijayshankar had quit the BJP in 2017 and joined the Congress ahead of the 2018 Assembly elections.

The Congress delegation’s meeting came after Mr Vijayshankar said he had been invited to return to the BJP fold and he would take an appropriate decision after discussing the matter with his supporters in Hunsur and other parts of Mysuru region.

Mr Vijayshankar, who is rumoured to have met BJP’s state unit president Nalin Kumar Kateel during the latter’s visit to Mysuru recently, had also expressed his disillusionment in the Congress and said he does not see a political future for himself in the party. Neither does he stand any chance of being fielded as the party candidate from either Hunsur or Periyapatna assembly segments in the district, Mr Vijayshankar had said he had been forced to take a decision in the interest of his political career.

However, the delegation advised Mr Vijayshankar advised against losing hope. “After losing elections, one needs to be patient. Chances will come later. Don’t leave the party” was the advice given to the former MP by Mr Dhruvanarayan.

The former Chamarajanagar MP told Mr Vijayshankar that he too had not been receiving.

Mr Vijaykumar, who also sought to remind Mr Vijaykumar that the party had fielded him as its candidate from Mysuru in the recently held Lok Sabha polls, said a lot of people in the party had worked for him the elections. He assured Mr Vijayshankar that he will get posts and positions if he continued in the party.

The Kerala Police said that they had either injured or killed at least three suspected Maoists in a gun battle between the armed irregulars and Thunderbolt commandos in Agali forests in Palakkad district early on Monday. Top officials told The Hindu that the Maoist casualties could include two men and a woman. The police are […]

Violence will be dealt with firmly: Kishan Reddy

Union Minister of State for Home G. Kishan Reddy strongly condemned the violence in Delhi, but said the situation was very much in control and paramilitary forces have been pressed into service to restore peace in trouble-torn areas there. However, “whoever is responsible for the violence, destroying or setting on fire private/public properties will not […]

Held for passing lewd comments on woman on social media

The Crime Branch of Assam police has arrested one Syed Abbass with the help of the Jammu and Kashmir police for passing allegedly an obscene comment on the widow of CRPF constable Sunil Kalita who was killed in an extremist attack in Jharkhand recently. One Ramen Barua lodged an FIR at the Kamalpur police station […]