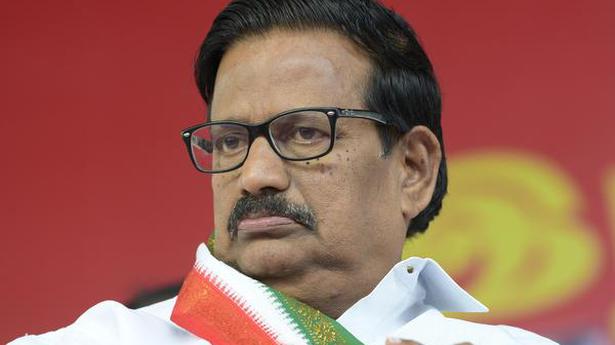 Congress leaders from Tamil Nadu are camping in Delhi to finalise the candidate for the Nanguneri Assembly constituency, where a byelection is due on October 21 along with one in Vikravandi. The Nanguneri seat was allotted to the party by its ally, the DMK.

While the ruling AIADMK has already announced its candidates for Vikravandi and Nanguneri, the DMK has made its pick for Vikravandi.

Tamil Nadu Congress Committee president K.S. Alagiri and Kanyakumari MP H. Vasanthakumar are among the leaders who have gone to Delhi to get clearance from the high-command. “We have a system in place and the high-command alone can clear the name of the candidate. It will be announced on Friday,” Mr. Alagiri said.

On Thursday, the Congress high-command was busy with finalising candidates for Puducherry’s Kamaraj Nagar and the Maharashtra Assembly polls. Party sources said Urvasi Amirtharaj, son of late Congress MLA Urvasi Selvaraj, was the front-runner among the shortlisted candidates. Former TNCC president Kumari Ananthan, brother of Mr. Vasanthakumar, was not considered in view of his age and tough competition in the constituency.

The DMK has already constituted a mega committee, headed by former Minister I. Periyasamy, to oversee the byelection in Nanguneri. That the DMK has accorded importance to the constituency is explained by the fact that all former DMK Ministers, district secretaries of southern Tamil Nadu, MLAs and MPs have been included in the committee.

Farmers from Nagamangala in Mandya district on Wednesday met Horticulture and district in-charge Minister K.C. Narayana Gowda and demanded that the government drop the proposed industrial estate at Nagamangala. The State government has issued a preliminary notification for acquisition of 1,277 acres of land. Mr. Gowda assured the delegation of farmers that he would speak […]

Coronavirus | Bihar toll rises to 2 after patient dies in Patna

A 35-year old COVID-19 patient died on Friday in Patna, taking the total number of pandemic deaths in the State to two. The total number of positive COVID-19 cases in Bihar stands at 83. The man from Raghopur area of Vaishali district was admitted at the All India Institute of Medical Sciences (AIIMS) in Patna […]