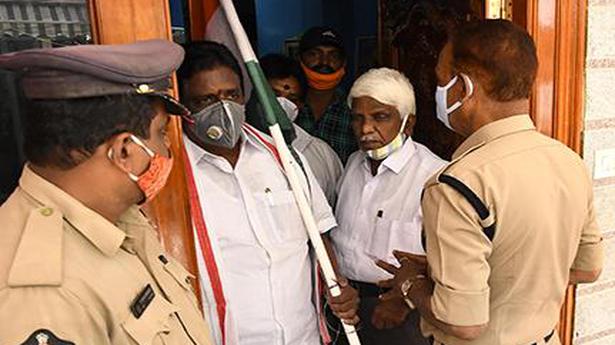 Andhra Pradesh Congress Committee president Sake Sailajanath, working president Sk. Masthan Vali and scores of other party leaders were kept under house arrest on Saturday as they were proceeding to meet Chief Minister Y.S. Jagan Mohan Reddy for requesting him to not break the capital into three parts in the name of decentralisation and shift the ‘executive capital’ to Visakhapatnam with that excuse.

Mr. Sailajanath was confined to the party office at Mangalagiri and Mr. Vali to his residence in Guntur by the police who were deployed in large numbers to prevent any untoward incident.

On the occasion, Mr. Sailajanath said his party was in favour of Amaravati as the capital city and that the denial of an appointment with the CM exposed his undemocratic functioning.

Former Chief Minister Y.S. Rajasekhara Reddy would not have behaved like his son, when the issue at stake had far-reaching implications for the five crore people of the State, the PCC chief observed.

Sipcot to plant 24,000 saplings in three industrial parks by end of December

The State Industries Promotion Corporation of Tamilnadu Ltd. (Sipcot), along with the Forest Department, will complete planting about 24,000 saplings across three industrial parks in Chennai by the end of December as a part of a larger project. The aim of the project is to plant 2.34 lakh saplings in the 19 industrial parks of […]

The new Yeshwantpur-Vasco-da-Gama Express Special via Karwar has become a reality beating all the odds put forth by Konkan Railway Corporation Ltd., (KRCL) with the Railway Ministry approving its flagging off on Saturday from Yeshwantpur. Chief Minister B.S. Yediyurappa and Minister of State for Railways Suresh C. Angadi would flag off the new train at […]

TNCC president K.S. Alagiri slammed Union Finance Minister Nirmala Sitharaman for her comments that millennials were now preferring not to commit to EMIs for an automobile and instead choose Ola or Uber or the Metrorail. “Economists have come to a conclusion that it is due to slowdown in the economy that people’s purchasing power has […]