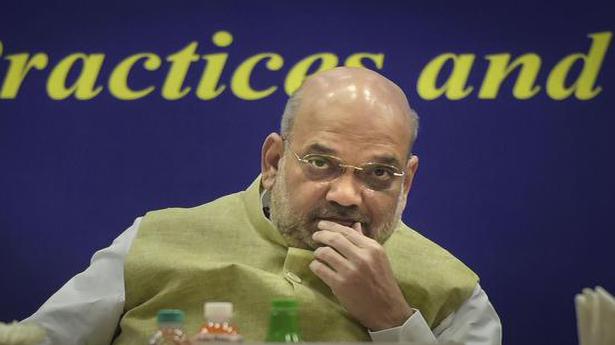 Attacking the Congress, Home Minister Amit Shah said on Sunday that the party should be “ashamed” that its leader Rahul Gandhi’s statement was used by Pakistan in its petition to the UN on Kashmir.

At a public meeting, Mr. Shah, also the BJP president, said people have supported the government’s move to nullify Article 370 but some, he added in a swipe at Mr. Gandhi, are still opposing it.

“The Congress opposed the move to remove Article 370. Whatever statements Rahul Gandhi make are lauded in Pakistan. Pakistan has included his comments in its plea. Congress leaders should be ashamed that these statements are being used against India,” he said.

Mr. Gandhi had, in a statement, spoken about reports of violence and “people dying” in Kashmir following the removal of provisions of Article 370, which gave Jammu and Kashmir special status, and Pakistan had mentioned it in its petition against India.

Mr. Shah said not a single bullet or teargas shell has been fired in Kashmir nor has anybody been killed since the Centre revoked Article 370.

“Today, questions are being raised about law and order in Kashmir. I would like to tell the entire country and the world that Kashmir is entirely peaceful. Ever since the removal of Article 370, not a single bullet or teargas shell has been fired, nor has anybody been killed in Kashmir till date,” he said at a rally in Silvassa, Gujarat.

Mr. Shah said the revocation of the special status paved the way for development in the State and it will be a “final nail in the coffin of terrorism”. The move has fully integrated Jammu and Kashmir with India, he said.

The Congress had hit out at Pakistan for dragging Mr. Gandhi’s name, and the former Congress chief had tweeted that Jammu and Kashmir was an internal matter and there was no room for Pakistan or any other country to intervene.

Mr. Shah accused the Congress of breaking the tradition of the Opposition supporting the government on issues of national interest.

He claimed the BJP and its predecessor Bharatiya Jan Sangh, when in the Opposition, supported governments over issues of national interest like the war with Pakistan and China, and over resolutions declaring Jammu and Kashmir an integral part of India.

“It has been a tradition in the country. When the question is of national interest, we should rise above party politics to think about the country. You [Congress] are breaking the tradition. You do not know that when you play votebank politics, people are assessing you on the same,” he said.

Mr. Shah also accused the Congress of siding with people raising anti-India slogans in Jawaharlal Nehru University in Delhi as well as questioning the Modi government over surgical strikes on Pakistan.

“When we removed Article 370 and 35A, you continue to oppose us. I would like to ask Congress leaders, where do you want to do politics? You do not know the people of India, who stand like a rock behind Narendra Modi,” he noted.

He said the decision to aborgate Article 370 could only be taken by the Prime Minister and the move would pave the way for peace and development in the State.

“I can tell you, as his Minister, the decision taken by Modiji is something that nobody else could have taken. Many came and went in 70 years, ruled for three generations, but could not remove Article 370. People are blessing the Prime Minister for this,” he said.

During his visit to Silvassa, Mr. Shah laid the foundation stone of a ₹61-crore educational hub, inaugurated a paramedical institute building constructed at a cost of ₹8 crore and a ₹10-crore health centre.

He also launched a midday meal scheme for 280 schools in the Union Territory of Dadra and Nagar Haveli by NGO Akshay Patra, as well as a scheme for cheap meals for labourers.

He also commenced the first academic session of a medical college in Silvassa.

On the day when the nation celebrated the 150th birth anniversary of Mahatma Gandhi, miscreants had defaced his poster at a meusum in Rewa, Madhya Pradesh, and wrote rashtradrohi (traitor) on it. The Rewa police have registered a case against unidentified persons. Furthermore, Congress district president Gurmeet Singh (Mangu) has claimed an urn carrying the […]

The ruling Bharatiya Janata Party (BJP) on Sunday released its manifesto for the Haryana Assembly election, with a focus on farmers, youth, women and healthcare in a bid to regain power in the State. Party working president J.P. Nadda said that, if elected, the BJP government would would focus on villages, farmers and the deprived […]