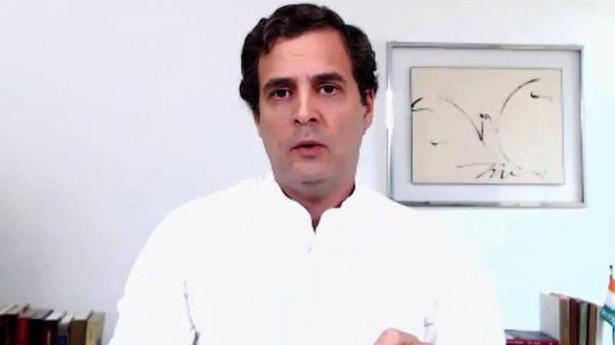 Party to look for winnable seats in T.N., central leadership to take call on alliance in Assam

Senior Congress leaders, who are part of the panel to assist party president Sonia Gandhi, along with former party chief Rahul Gandhi, on Monday virtually discussed the party’s poll preparedness in Tamil Nadu and Assam, which will go to polls in April-May next year.

The meeting was a closed door one, but party insiders claimed it was decided that the Congress, backed by a data-driven exercise, should identify winnable seats in Tamil Nadu when it negotiates with its ally, the Dravida Munnetra Kazhagam.

The central leadership, however, asked Assam leaders to refrain from making any public comment on a possible alliance with Badruddin Ajmal’s All India United Democratic Front (AIUDF), a party with a large minority base.

Maintaining discipline, and the need to refrain from speaking out of turn on crucial political issuess figured in both the virtual meetings.

Mr. Gandhi and other members of the special panel, including K. C. Venugopal, Ambika Soni, Mukul Wasnik and Randeep Surjewala, had two separate virtual meetings with the leaders of the two States.

Without mentioning anybody’s name, the meeting on Tamil Nadu ended with Mr. Venugopal cautioning party leaders on violating discipline by speaking out in the press; his statement was endorsed by Mr. Gandhi.

Fresh from the Bihar debacle in which the Congress won only 19 of the 70 seats it contested, Tamil Nadu leaders talked about identifying seats where the party can win as part of the DMK-led alliance. Former Finance Minister P. Chidambaram is learnt to have stressed on identifying the seats using data, as well as strengthening booth-level committees.

Several leaders, including Lok Sabha member Manickam Tagore, are said to have asked Mr. Gandhi to campaign more aggressively in Tamil Nadu as it be could be “a gamechanger for the party”.

While a few State leaders also asked the party high command to effect organisational changes only after the Assembly polls, one leader expressed apprehensions about electronic voting machines (EVMs).

In the meeting with Assam leaders, Mr. Gandhi told them to speak in one voice on all important political issues and “leave the question of alliances and funding to the central leadership of the party”.

The meeting also spoke with All India Congress Committee secretary, Bhupen Borah, taking on Assam Congress chief, Ripun Bora, for making a public statement on having an alliance without it having been finalised by the high command.

“Rahul-ji told us that there will be every attempt at polarisation by the BJP (Bharatiya Janata Party) and we should be able to manage it intelligently,” one of the Assam leaders told The Hindu.

A Delhi court on Friday granted bail to 12 people arrested in connection with violence in Seemapuri area of northeast Delhi during recent protests against the Citizenship Amendment Act. Additional Sessions Judge Sanjeev Kumar Malhotra granted the relief to the accused on a personal bond of ₹20,000 each and one surety of like amount. The […]

Difficult for AIADMK to face elections without ensuring exemption from NEET, Alagiri says

The Tamil Nadu Congress Committee president said the State government must “use its influence” to gain an exemption from NEET from the Central government Source: thehindu.com Related