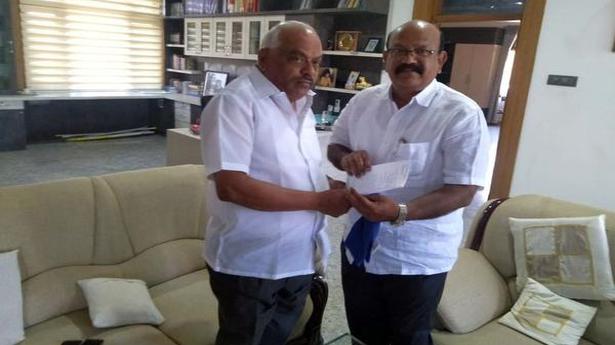 Congress’s Chincholi MLA Umesh Jadhav, whose disqualification has been sought under the anti-defection law for skipping two legislature party meetings, on Monday submitted his resignation to Speaker K.R. Ramesh Kumar.

Mr. Jadhav, a two-time MLA, had claimed he would not quit the Congress.

His brother, Ramachandra Jadhav, however, told reporters, “My brother will join the BJP and contest from the Kalaburgi Lok Sabha constituency.”

Sources said Mr. Jadhav was keen on contesting on a BJP ticket against Congress leader M. Mallikarjun Kharge, who has not lost an election so far.

The sources said factors such as denial of ministerial berth during the Cabinet expansion in December, owing to the alleged interference of Mr. Kharge, and dominance in the district by Social Welfare Minister Priyank Kharge forced Mr. Jadhav to distance himself from the party in recent days.

Places of worship, hotels, malls to reopen in Assam on June 8

Stalin interacts with those detained over anti-CAA kolams

DMK president M.K. Stalin on Monday interacted with some of those who were detained by the Chennai police on Sunday for drawing kolam (rangoli) with anti-CAA/NRC/NPR messages at Besant Nagar. In a statement, Mr. Stalin said the AIADMK government had stooped to the level of arresting women drawing kolam, while supporters of the CAA were […]