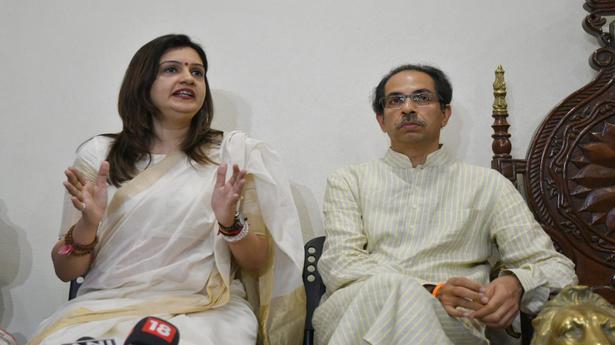 Congress spokesperson Priyanka Chaturvedi, who had expressed her displeasure against the party in a tweet, on Friday joined the Shiv Sena. She sent her resignation to Congress president Rahul Gandhi on Thursday evening.

At a press conference she addressed along with Shiv Sena leader Uddhav Thackeray in Mumbai, Ms Chaturvedi said, “Happy that the Sena has taken me in as a family member. I am thankful to Uddhavji and Adityaji.”

Mr. Thackeray said, “No need to introduce Priyankaji. She confidently defended her party. She thought that the Sena is best choice. I welcome you to the Sena family.”

Earlier, as Ms Chaturvedi put her resignation letter on her Twitter handle, Shiv Sena MP Sanjay Rout told reporters that the former Congress spokesperson from Mumbai would be joining their party.

In her resignation letter, Ms Chaturvedi said, “In the last few weeks, certain things have convinced me that my services are not valued in the organization and I have reached the end of the road. At the same time, I also feel the more time I spend in the organization will be at the cost of my own self respect and dignity.”

The letter, copied to K.C. Venugopal and Randeep Surjewala, read, “What saddens me is that despite the safety, dignity, empowerment of women being promoted by the party and has been your call to action the same is not reflected in the action of some of the members of the party.”

I am absolutely overwhelmed and grateful with the love and support I have got across board from the nation in the past 3 days.
I consider myself blessed with this immense outpouring of support. Thank you to all who have been a part of this journey. pic.twitter.com/WhUYYlwHLj

The trigger for her action is stated to be the reinstatement by the party on April 15 of some party workers in Mathura who had misbehaved with her at a recent press conference. They were subjected to disciplinary action, initially.

“Deeply saddened that lumpen goons get prefence in @incindia over those who have given their sweat&blood. Having faced brickbats&abuse across board for the party but yet those who threatened me within the party getting away with not even a rap on their knuckles is unfortunate,” Ms. Chaturvedi tweeted on Wednesday. She has removed all the reference to the Congress from her Twitter bio.

Ms Chaturvedi was also upset over being passed over in allotment of party ticket to actor Urmila Matondkar for the Mumbai North Lok Sabha constituency.

“I have not asked, sought rewards or returns for  myself in the hope that the party and it’s leadership would take care of my aspirations,”she wrote in her letter without clearly spelling out her disappointment over being denied a Lok Sabha ticket.

Deputy Chief Minister Manish Sisodia said on Tuesday that 79 houses and 327 shops were completely gutted in arson during the communal violence in northeast Delhi last week. According to police, 41 bodies have been recovered so far, Mr. Sisodia said at a press conference. Besides the 79 completely burnt houses, 168 suffered substantial and […]

E-pass procurement, a major problem for labourers and employers in Madurai

Collector says there has been a tremendous inflow of requests since the time the e-portal opened Source: thehindu.com Related