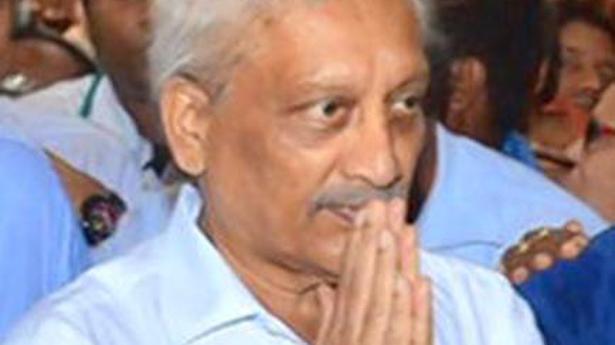 The Congress on Saturday asked Goa Governor Mridula Sinha to dismiss the government led by Chief Minister Manohar Parrikar as “it has lost the strength of the House” following the death of BJP MLA Francis D’Souza and asked her to invite the party to form the government.

It also urged her “not to bring the State under President’s Rule as it would be a violation of the Constitution”. In a letter to the Governor, Leader of the Opposition Chandrakant Kavlekar said the coalition government, led by Mr. Parrikar, was now in a “minority”.

The demand came amid rumours of a deterioration in Mr. Parrikar’s health. The Chief Minister has been under treatment for pancreatic cancer at home. A statement from the Chief Minister’s office, however, said his condition was ‘stable’.

Following the resignation of two Congress MLAs last October and the death of Mr. D’Souza on February 14, the effective strength of the Assembly is now 37. The Election Commission has already announced by-elections to three Assembly constituencies along with Lok Sabha polls on April 23.

But the BJP’s strength in the truncated Assembly has come down to 13 including the CM, as against the Congress’s 14 MLAs.

IIT to set up research centre in data science

The Indian Institute of Technology (IIT), Palakkad, will set up a top-class research centre in data science on its campus at Kanjikode. The Centre for Research and Education in Data Science (CREDS) is being established with a view to providing quality education and research and to develop data science and artificial intelligence. Experts from engineering […]

Chief Minister N. Chandrababu Naidu on Saturday promised the Deputy CM’s post to a leader from the minorities. Addressing a meeting at Ponnur, Mr. Naidu said he would give a monthly honorarium of ₹10,000 to Imams and would construct a Haj House in Vijayawada. Grave allegation Directing his ire at the BJP-led NDA government, he […]

Several veterans entitled to disability pensions had a shock when they received just few hundred rupees in their bank accounts as pension for the month of February. This was due to an order by the Principal Controller of Defence Accounts (PCDA), Allahabad, to deduct tax on disability pensions despite assurances to the contrary by the […]