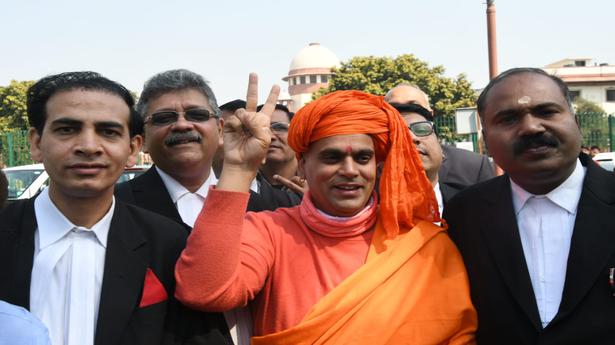 A five-judge Bench of the Supreme Court, led by Chief Justice of India (CJI) Ranjan Gogoi, on March 8 sent the Ayodhya dispute for mediation in a bid to heal minds and hearts “if possible”.

The Bench appointed a panel of mediators, including former judge of the court Justice F.M.I. Kalifulla, as Chairman; spiritual leader Sri Sri Ravi Shankar; and senior advocate Sriram Panchu, a veteran lawyer with years of experience in alternative dispute resolution.

The mediation would start in a week’s time in Faizabad district of Uttar Pradesh, of which the disputed area in Ayodhya is a part of. It would be held with “utmost confidentiality”. There would be no reporting in print or electronic media on the mediation process. The time given is eight weeks, but the court urged the mediators to “conclude at the earliest”. They would have to file a status report in the court in four weeks. They could co-opt more on the panel if necessary and take whatever legal assistance is required. The State government would provide them with all the necessary facilities. The mediation would be held in camera.

The court had held that there is no “legal impediment” to sending the dispute for mediation. It cited Order 23 Rule 3 of the Civil Procedure Code for attempting to arrive at a ‘compromise decree’ in the long-pending civil dispute for the title of the disputed area where the Babri Masjid stood before its demolition by ‘kar sevaks’ in 1992.

According to the provision, if the parties reach an agreement, the Supreme Court can order such a settlement to be recorded and pass a decree accepting the resolution among the parties.

The Bench had pushed “negotiated compromise” as a means to heal hearts and minds. The dispute was a festering wound that had touched the religious sentiments of Hindus and Muslims for decades.

Justice S.A. Bobde, on the Bench, had put matters in perspective by observing that the court was only concerned about the present state of the Ramjanmabhoomi-Babri Masjid case and not the past history of “Mughal invasion and conquests of Babur”.

“Primarily this is not about the 1500 sq ft of disputed land, but about religious sentiments. We know its impact on public sentiment, on body politic. We are looking at minds, hearts and healing if possible,” he had observed.

The Muslim parties had agreed to give mediation a try, while there is a dissonance of opinion among the Hindu appellants, who have said their faith that Lord Ram was born in the disputed land was non-negotiable.They had even suggested that the court should issue a public notice on whether or not to send the dispute for mediation.

“The faith that Lord Ram was born there is not negotiable. But we are willing to crowdfund a mosque somewhere else,” senior advocate C.S. Vaidyanathan, for Ram Lalla, the deity, had submitted.

Solicitor General Tushar Mehta, for the Uttar Pradesh government, had also submitted that the path of mediation was both “imprudent and inadvisable”.

The eight-week deadline is the time given to the Muslim parties to examine the accuracy and relevance of the State government’s official translation of thousands of pages of oral depositions and exhibits in the Ayodhya title suit appeals that have been pending since 2010.

In a February 26 hearing, Chief Justice Gogoi invoked Section 89 of the Civil Procedure Code to propose mediation as an “effective utilisation of time” in the eight weeks.

The CJI had expressed the hope that mediation may spell a peaceful end to the volatile dispute between the members of the two religious faiths.

More than 2,000 Tamil Nadu fishermen were allegedly attacked and chased away by the Sri Lankan Navy while they were fishing in Indian waters, a fishermen association leader said here. The fishermen from this island town had ventured into the sea on Monday and were fishing when the Lankan naval personnel trespassed into Indian waters […]

Madras HC restraint on Patanjali’s use of trademark ‘Coronil’

Chennai-based company Arudra Engineering Private Limited has claimed that ‘Coronil’ is a trademark owned by it since 1993. Source: thehindu.com Related

Vizianagaram district experienced significant rainfall with the impact of severe cyclonic storm Fani, providing much-needed relief to the people who were struggling due to non availability of drinking water. Terlam received the highest rainfall of 44 mm followed by Merakamudidam with 32.6 mm till 6 a.m, Friday. Cheepurupalli witnessed 37 mm rain, Garividi 30.6 mm […]