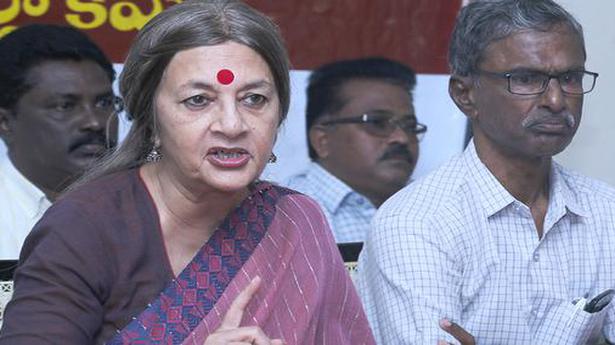 The people of the country should come together to defend the constitution, democracy and economy that are under threat not from external forces but from the Modi-Shah government, CPI(M) Polit Bureau member Brinda Karat said here on Saturday.

Ms. Karat was here to attend an Adivasi conference on land rights at Eturunagaram in Mulugu district on Saturday.

She said the people of the country were vexed with the lies and abuse being manufactured by the government. The country was now witnessing the highest unemployment rate; inequality had grown exponentially. The 1% rich owned what belonged to 70% of the country’s population and that had happened only during the past six years. The economy was in a crisis but to conceal these failures, the Modi-Shah government had started a factory that manufactured lies and abuses against whoever questioned these failures. “Whoever questions the government is branded as a Pakistani agent or anti-national. The people are fed up with this Modi-Shah government and its lies,” Ms. Karat said.

The CPI(M) leader wanted the people to take a pledge on January 26 that they would stand united to defend the constitution, democracy and economy of the country. “One happy thing is that youngsters of the country now realised the fake patriotism of the Modi-Shah duo and now are fighting against these divisive forces. The students at the JNU succeeded in gaining an upper hand over the autocratic forces,” she said.

On Telangana, Ms. Karat said the ruling TRS government which voted against the CAA had suppressed the people from protesting against the Act. She said the TRS was adopting double standards and going the way of the BJP in depriving the poor of their rights. “The BJP and the TRS are snatching away lands from poor tribals and giving them away to the rich. Both the parties are same,” she said adding that the rights ton land and forest belonged to tribal people.

The second Shramik special train with 1,131 passengers left Kadpadi junction for Ranchi on Friday at 7.40 p.m. The passengers were brought to the stat Source: thehindu.com Related