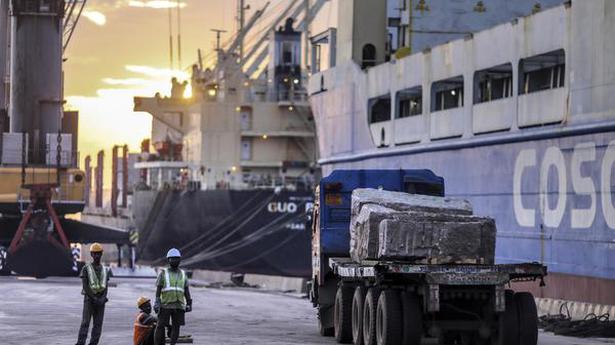 A coastal service from Krishnapatnam Port to Chittagong in Bangladesh for the benefit of exporters from the region is likely to be launched soon by the Container Corporation of India (CONCOR).

A fortnightly service initially, it will be targeted at exporters in and around Hyderabad, Bengaluru, many areas of Andhra Pradesh and Nagpur, primarily those supplying raw material and engineering products to the textile industry of Bangladesh.

“We are expecting that it would take a month or two [for the launch], CONCOR senior general manager (C&O), South Central Region D. Satyanarayana said, adding frequency of the service can be increased once the patronage picked up. On the factors behind the proposed service, he said it follows demand from exporters. At present, containerised exports to Bangladesh from the region is routed through “JNPT on the west coast. Exports from some areas such as Guntur is sent by road,” he said on Friday. For CONCOR, whose strong point is rail movement, this will be first such service from the east coast.

At present, it operates a coastal service from Kandla that connects Mangalore, Kochi and Tuticorin. The vessel used for the service can carry 700 TEUs (twenty foot equivalent units). “ We have been successfully running that, patronage is good and running on a weekly basis,” he said. Earlier on Thursday, he mentioned about CONCOR’s plans in response to queries at a seminar organised by Federation of India Export Organisations.

CONCOR is also evaluating the prospects of operating a rail service connecting Hyderabad, Chennai and Krishnapatnam.

The Corporation, he said, had introduced an incentive scheme from May 1. Under this, it provides volume discounts above 30 TEUs a month to encourage exporters from the region to use its services.

Activists sent back from Srinagar airport

The Budgam district administration detained a National Alliance of People’s Movements delegation at the Srinagar airport on Friday and sent it back to New Delhi. The decision was taken in view of a threat to law and order in the Valley. The notice issued from the Budgam District Magistrate office referred to “credible inputs” from […]

A parliamentary panel has recommended a code of conduct for Internet service providers (ISPs) and strengthening the National Commission for Protection of Child Rights to curb child pornography. The report, prepared by an ad hoc committee set up by the Rajya Sabha and led by Congress MP Jairam Ramesh, was submitted to the Chairman of […]

Do not delay decision on extension of lockdown, Stalin writes to Chief Minister

DMK president M.K. Stalin on Saturday urged the State government to take a decision on extending the COVID-19 lockdown without any delay so that the people could mentally prepare for it. The present lockdown is due to end on April 14. In a letter to Chief Minister Edappadi K. Palaniswami, he pointed out that the […]