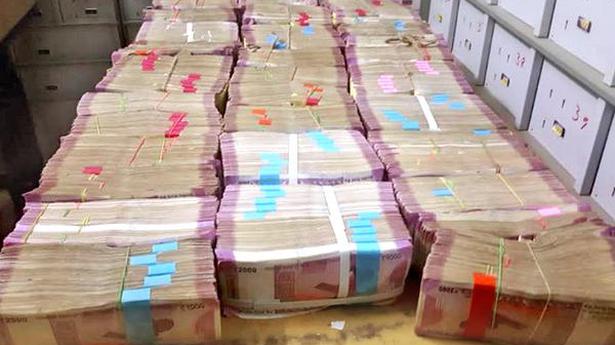 Public works contractors in Hassan and Mandya Lok Sabha constituencies, whose residences and business premises were searched by the investigation wing of the Income Tax Department, have not been able to show the utilisation of money they had withdrawn from banks, sources have said.

The searches on March 28 and 29, on 13 contractors and five engineers of the Public Works Department (PWD) at 21 locations, led to seizure of close to ₹10 crore, including ₹1.69-crore worth gold jewellery. The searches were done on premises including residences belonging to two nephews of Minor Irrigation Minister C.S. Puttaraju — one a zilla panchayat member in Mandya and another a PWD executive engineer in Hassan.

The searches on contractors, believed to be close to Chief Minister H.D. Kumaraswamy’s brother and Public Works Minister H.D. Revanna, had generated political heat, with the governing combine Janata Dal (Secular) and Congress accusing the Union government of misusing the Central agency. Mr. Kumaraswamy, chairman of the coalition’s coordination committee Siddaramaiah and several Cabinet Ministers had staged a protest outside the I-T Department office here following the searches.

In an unprecedented move, the I-T Department, in the midst of the operation, had issued a note to clarify that no Minister/MLA/MP were being searched.

Sources said evidences gathered during searches had shown that funds were allegedly released to contractors for various government projects in connivance with engineers of the State government departments without ascertaining whether or not the works had been executed on ground.

“These contractors were found to have withdrawn money from bank accounts immediately. They, however, have failed to explain or are unable to show evidence to prove how the money withdrawn from banks has been used,” sources said.

According to sources, the modus operandi involved fixing award of tenders in favour of select contractors, submission of forged bills, release of payment immediately, and withdrawal of cash by contractors who then allegedly passed on the money to politicians to be used for elections. “The cash was transported in convoys with sufficient police cover and protection before being distributed to lower-level party functionaries,” a source claimed.

Income Tax officials maintained that while the searches on contractors had been planned for at least two months since a similar modus operandi had been employed during the Assembly elections in May 2018, searches on rice mill owners and others in the hotly contested Mandya and Hassan Lok Sabha constituencies were part of election expenditure monitoring.

India and America have reaffirmed their commitment to work together in support of a free, open and inclusive Indo-Pacific region and the two sides agreed to deepen their cooperation to address regional and global threats and to combat terrorism, according to the U.S. State Department. India, the U.S. and several other world powers have been […]

Himachal Pradesh Power Minister Anil Sharma tendered his resignation from the Cabinet on Friday, days after his son Ashray Sharma was announced as the Congress candidate from the Mandi Lok Sabha constituency. The Minister was under attack from the ruling BJP and facing an uneasy equation with Chief Minister Jai Ram Thakur after he conveyed […]

COVID-19: Retreat event at Attari-Wagah border to be conducted without spectators, says BSF

People will not be allowed to attend the popular daily retreat ceremony between India and Pakistan at the Attari-Wagah border in Punjab in view of coronavirus (COVID-19) outbreak, the BSF said on Friday. The precautionary measure will be effective from Saturday. The Border Security Force (BSF) will continue performing the ceremonial duty of lowering the […]