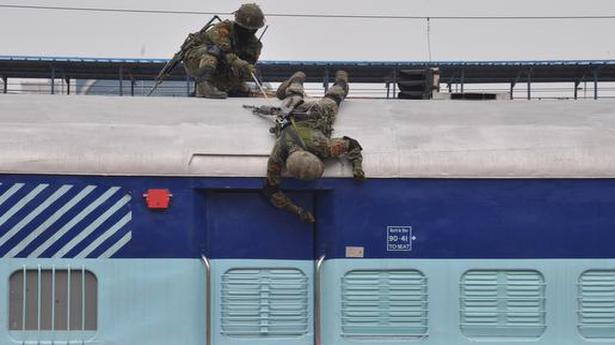 The first deployment of the Railway’s commando unit CORAS will be in the Naxal-hit areas of Chhattisgarh, RPF DG Arun Kumar said on Wednesday.

He said a new state-of-the-art facility will be built in Haryana’s Jagadhari city to train CORAS commandos.

Speaking at the launch of the Commandos for Railway Safety (CORAS), Railway Minister Piyush Goyal said he had approved the setting up of the institute and instructed the Railway Protection Force (RPF) to provide them with training of international standards.

“CORAS’ first deployment will be in naxal-hit Chattisgarh. They will also be deployed in areas where railway has major ongoing projects which need security like northeastern States and Jammu and Kashmir,” the director general of the RPF said.

The unit is being envisaged as a responder for any situation pertaining to damage, disturbance, disruption of train operations, attack/hostage/hijack, disaster situations in railway areas, he said.

Comprising RPF and Railway Protection Special Force (RPSF) personnel, the CORAS is headed by the RPF DG and is armed with special uniforms with bullet-proof jackets, helmets and sophisticated weapons, Mr. Kumar said.

The officer said there are 14 battalions of the RPSF and one of its battalion had been converted into CORAS. The men of CORAS have been trained in the NSG academy and Greyhounds, he said.

Madhya Pradesh Chief Minister Kamal Nath on Friday alleged that the Union government was resorting to “divisive politics and politics of distractions” to divert attention from the economic slowdown. “Anything that is divisive, we will not do it. The stand of the Congress in any law that divides society will be the stand of the […]

India’s High Commission is ascertaining details of Indians being affected in the attacks amid reports that nine Indians were missing. External Affairs Ministry Spokesperson Raveesh Kumar said the High Commission was in touch with authorities. India on Friday said that it was following the due process before announcing the number of Indian-origin persons among the […]

E-bids to begin for redevelopment project of railway station

The tender is tentatively scheduled to be awarded by the end of August Source: thehindu.com Related