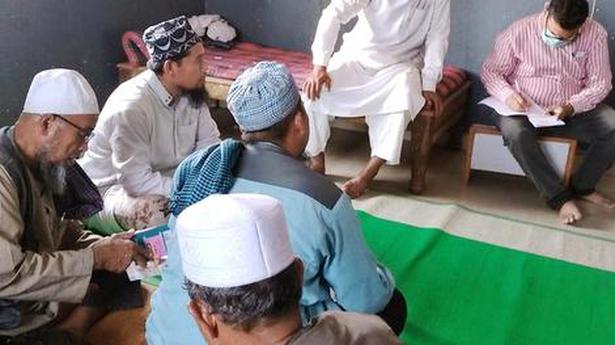 About 1,500 people from Karnataka may have attended the Tablighi Jamaat event in Nizamuddin West, Delhi, from March 8 to 20. Of these, the State has been able to trace 800 people and 143 of these have been found to be symptomatic.

Jawaid Akhtar, Additional Chief Secretary (Health and Family Welfare), said that the Centre had sent the list of 1,500 people to the State. “We cannot say if all these have attended the congregation. Some of them may have attended and some may be the contacts of those who have attended. We have been able to trace 800 from the list and samples of 143 symptomatic persons have been sent for tests,” he said.

Stating that the department was working on identifying the number of foreigners who attended the congregation from Karnataka, Mr. Akhtar said: “We had issued a public notification on Tuesday appealing to those who attended the meet to self report to the department. Following this, we have been able to contact and screen 800 across the State.” He said the department is also collecting the travel history of the persons so that it can cross notify the other States.

Sources said a study of digital footprints of those who were detected as COVID-19 positive in Andhra Pradesh had been done. Following a similar approach, the Centre sent a list of nearly 1,500 people to Karnataka. The list is based on phone numbers and addresses given to telecom companies while obtaining the phone numbers.

The Centre has told the State that the addresses given in the list may or may not be the current place of residence. The list is only indicative that the holder of the number was present in the infection transmission hotspot and may or may not have been infected.

“Also, the data indicates the presence of certain mobile numbers within 250 to 500 metres of the religious congregation site which itself has a perimeter of 70 metres. Highest priority may be accorded to the numbers which stayed for more than one day in the area,” stated the Centre’s communication.

Even those filmmakers who manage to stay ahead of the game encounter a phase when the game catches up with them, at times leaving them far behind. New filmmakers arrive, styles evolve, leaving the old masters gasping for breath. For about two decades till the late 1990s, Joshiy was one name which stood out in […]

A long road to last rites