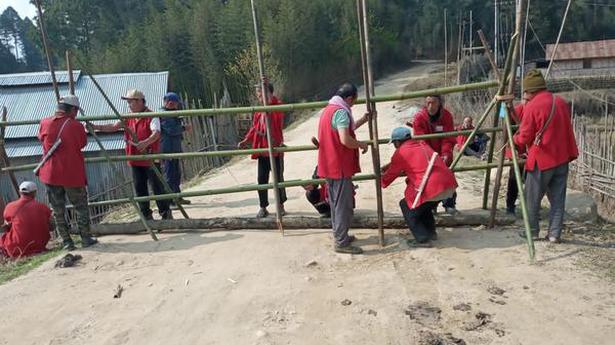 A ‘red army’ of wise old men and women are helping villages across some hill States in the northeast keep the novel coronavirus away.

Though a majority of those felled by the COVID-19 pandemic are aged 60 years or more, this hasn’t stopped the gaon buras (male villager elder) and gaon buris (female village elder) — usually referred to as GBs — from following their predecessors in forming a shield between the villages and the enemy — in this case, the virus.

Coronavirus | In northeast, people pitch in to ease lockdown misery of others

The village elders across the States are distinguished by their red coats provided by the government, which also pays them a stipend of ₹1,500 per month.

“The villagers look up to us in times of crisis as well as happiness. It is our duty to ensure their safety and liaise with the government agencies for guidelines and in maintaining order,” said Tanom Mibang, one of the three GBs of Lileng village in Arunachal Pradesh’s Siang district.

Mr. Mibang is 64, although the Assam Frontier (Administration of Justice) Regulation of 1945, under which GBs are appointed, prescribes the 35-60 age slab. A majority of Arunachal Pradesh’s estimated 9,500 GBs are 60 or more. A head gaon bura, who supervises five GBs, is usually older. Talom Tamut, who Mr. Mibang reports to, is 80 years old.

At just 43, Yachang Tacho of Salang village in Upper Subansiri district, is a rare exception. “The population of a village decides the number of GBs. During epidemics and disasters, we put our heads together to decide what is best for the villagers and share the responsibilities,” he told The Hindu.

Imnakumba Longchar, 59, of Khensa village in Mokokchung district of Nagaland, plays a similar role. “Keeping everyone calm is a major challenge,” he said.

Assisting the GBs in Nagaland are the dobashi, the custodians of Naga customary laws who also wear red coats. They have been salaried government employees since 1842 when the British appointed the first dobashis for interpreting Naga dialects into Assamese or Hindi.

“We are working under the State government to ensure everyone gets to access the necessities,” said Vizotuo Mejura, a 63-year-old dobashi from Phesama village in Kohima district. The village is home to some 5,000 people.

Arunachal Home Minister Bamang Felix said the importance of village veterans was evident from the inclusion of the powers of the GBs in the Constitution. “They are indispensable,” he said.

From July 15 till July 31, lockdown regulations that were in force until June 24, will come into effect Source: thehindu.com Related

For decades, collectors of rare Indian film memorabilia and, particularly, aficionados of the music of legendary Bollywood composer duo of Shanker-Jaikishan, have been doggedly searching for prints of a “lost” 1957 film starring Kishore Kumar, which uniquely featured a song picturised on Jaikishan himself. For Indian film cineastes, the haunting melody ‘Ae Pyase Dil Bezubaan’ […]