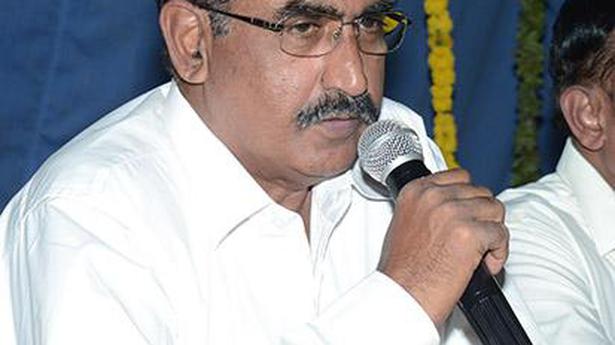 The Communist Party of India (Marxist) Telangana State Committee has cracked the whip against its leader and party nominee from Huzurnagar, Parepalli Sekhar Rao, whose nomination papers were rejected.

At a press conference on October 7, party State Secretary Tammineni Veerabhadram and central committee member – B.Nagaiah, State Committee members – B.Ramulu and D.G.Narasimha Rao said Mr. Sekhar Rao has been suspended for one year from the party for gross negligence in filing his nomination papers.

They said the nomination papers were rejected on technical grounds and the Returning Officer had given time for submitting proper documents. “The candidate had failed to submit the papers and the Suryapet District Committee Secretary M. Ramulu also acted in a negligent manner. Mr. Ramulu has been removed from his post holding him responsible for the embarrassing situation,” the leaders said.

Mr. Veerabhadram said the party had discussed the issue of extending support to other party. It was decided to back the candidature of Sambsiva Goud of the Telangana Praja Party. “All parties except the BJP had approached us for support. We had decided in principle not to support the Congress, TRS or the BJP. The issue before us was to support the Bahujan Left Front or the Telangana Praja Party. We decided in favour of the TPP,” he pointed out.

Elections to Huzurnagar Assembly seat, which was vacated by sitting member N.Uttam Kumar Reddy consequent to his election as MP from Nalgonda would be held on October 21. In all 28 candidates are in fray for the bypoll after 45 nominations including that of the CPI (M) candidate was rejected.

Many Congress workers joined the Janata Dal (Secular) in K.R. Pet on Tuesday promising that they would work for the victory of B.L. Devaraj in the byelections to K.R. Pet Assembly segment on December 5. Former Ministers H.D. Revanna and C.S. Puttaraju welcomed them by offering them JD(S) flags. Prominent among those who quit the […]

The Odisha Rural Development and Marketing Society, with the support of several other organisations, has started a project to provide income to women in the tribal-dominated Koraput district. Since July, over 1,000 tribal women have been trained to prepare tasty, marketable and hygienically prepared jackfruit chips. “The aim is to start mass production during summer […]

FM’s statement a joke on the state of economy: Congress

The Congress on Wednesday hit out at Finance Minister Nirmala Sitharaman for blaming the millennials for using Ola and Uber instead of buying cars for the slowdown, calling it a “gross overstatement” and a “grave joke” on the current state of economy. Party spokesperson and Rajya Sabha MP Abhishek Manu Singhvi said at a press […]