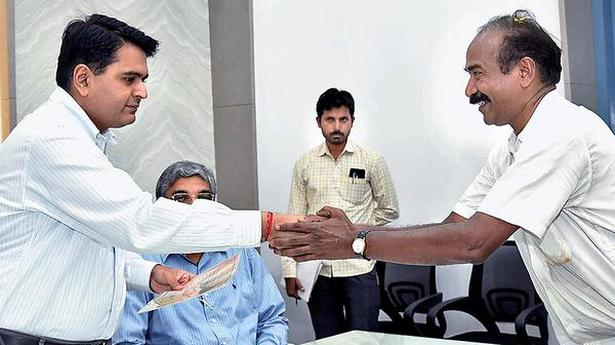 At the end of the counting of votes that lasted about 52 hours, Returning Officer and East Godavari Collector Kartikeya Misra handed over the election certificated to Mr. Rao in the presence of election observer J.S.V. Prasad at the Rangaraya Medical College here on Thursday.

Of the 2.93 lakh voters from both the districts, 1,92,024 electors cast their vote during the polling held on Friday. During the counting process that began on Monday morning, the election staff found that 13,852 votes were invalid. Basing on the valid votes of 1,78,172 votes, the magic figure was declared as 89,087 votes.

Born and brought up at Vemavarappadu village of Amalapuram mandal, Mr. Rao started his career as a schoolteacher.

Having been associated with the CPI(M) and its affiliated bodies, he took active part in several movements launched by farmers, teachers and employees. All the affiliated bodies of the CPI(M) extended their support to Mr. Rao when he filed the nomination and accompanied him during his poll campaign.

Speaking to the media after being declared as winner, Mr. Rao said he would focus on addressing the long pending problems of contract and outsourcing employees, besides chalking out strategies for the scrapping of the contributory pension scheme with the help of the like-minded MLCs in the Council.

Meanwhile, the contestants and their agents expressed dissatisfaction over the laborious process involved in the counting.

They alleged that even after knowing the size of the ballot papers that carry the names of 46 candidates, the officials failed to make adequate arrangements to ensure early completion of the counting of votes. They felt that increasing the number of tables would have reduced the counting time.

Mr. Misra, however, attributed the delay to the ballot size.

One nation-one language will never be a reality: Jairam Ramesh

Amid a raging debate over Hindi as a common language for the country, Congress leader Jairam Ramesh on Sunday said it would never be a reality The Rajya Sabha member also noted that former Prime Minister Jawaharlal Nehru was under attack daily by forces out to “denigrate and obliterate” his legacy and the very idea […]

Indecision over part of Anjanagiri reservoir bund delays its completion

Indecision over the type of structure or bund to plug the gap between two hillocks as part of the construction of Anjanagiri reservoir, a key component of Palamuru-Rangareddy Lift Irrigation Scheme, is likely to delay the completion of the first storage point of the project. Of the three reaches of bund construction to form the […]