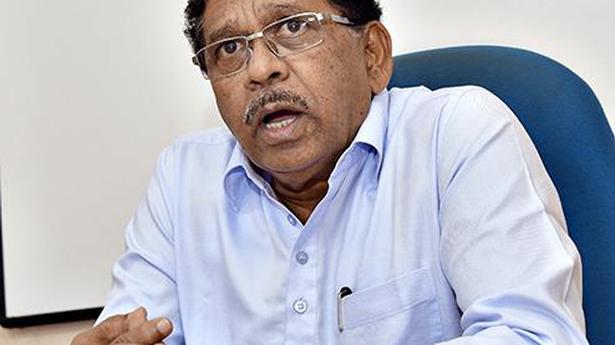 Deputy Chief Minister G. Parameshwara on Monday clarified that the credit for the Grama Vaastavya programmes undertaken by Chief Minister H.D. Kumaraswamy goes to the coalition government and not the Janata Dal (Secular) alone.

Speaking to reporters here on Monday, Dr. Parameshwara said Mr. Kumaraswamy was the Chief Minister of the coalition government comprising the Congress and the JD(S). “Will the credit then go to the JD(S) alone? It will go to the entire government,” he said.

Far from bringing only the JD(S) nearer to people, the Grama Vaastavya programmes help take the administration to the people, he said. When pointed out that only JD(S) workers were found during these programmes, Dr. Parameshwara clarified that Congress’s Ministers and workers too had participated in them.

Referring to the criticism heaped upon the Grama Vaastavya programmes by the BJP, Dr. Parameshwara said it was “natural” for the Opposition to criticise the government. “Even if the Chief Minister takes out a padayatra, the Opposition will criticise him. The BJP will criticise even the Jana Samparka Sabhes of the Congress,” he said.

He hoped the Opposition BJP would understand the purpose of holding the Grama Vaastavya programmes. When the Chief Minister visits a village and spends time there, it gives the residents an opportunity to bring their grievances to the notice of the government, he said.

Coconics to supply laptops to govt.

Home-grown joint venture hardware manufacturer Coconics has clinched an order, through competitive bidding, to supply 50% of the mid-level laptops to the Kerala government for the next six months. The deal is expected to save the State exchequer up to ₹16,000 on a single machine. Coconics, a joint initiative of the public sector KELTRON, Kerala […]

The Karnataka police on Friday detained at least nine journalists who reached Mangaluru from neighbouring Kerala to report the ground situation there following Thursday’s police firing that claimed the lives of two anti-citizenship law protestors. Provoked by the development, Youth Congress workers blocked vehicles from Karnataka in Wayanad. The Kerala Police has stepped up security […]