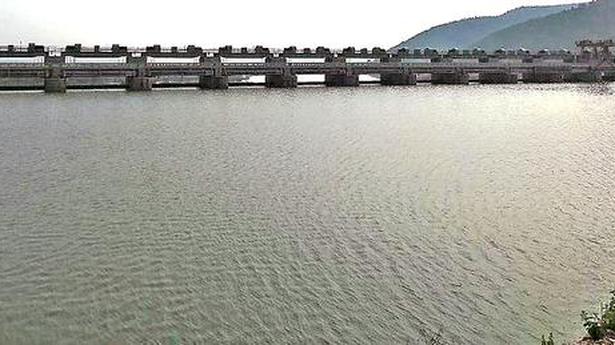 With the Somasila reservoir brimming with water, the Irrigation authorities on Saturday increased the discharge by 10,000 cusecs, to 29,000 cusecs.

Water release from the Somasila to the Kandaleru, which augments drinking water supply to Chennai, is maintained at 10,140 cusecs.

The storage in the Somasila reservoir, the lifeline of Nellore district, has increased to 74 tmcft, thanks to fresh floods in the Penna and its tributary Kundu.

Chances of Chennai getting its full quota of the Krishna water have brightened, thanks to continued inflows to the near full Srisailam from the upper riparian States of Karnataka and Maharashtra.

The two reservoirs in the district get water replenishment from the Srisailam reservoir, which has an inflow of 84,545 cusecs and an outflow of 78,886 cusecs.

The inflow to the Somasila reservoir, which was of the order of 30,000 cusecs on Saturday, was expected to go up to 45,000 cusecs in a couple of days, Nellore Circle Irrigation Superintending Engineer B.S.V. Prasada Rao said.

“With a flood cushion of only 4 tmcft, we have decided to lift the crest gates to avoid flooding of the low-lying areas after alerting people living downstream of the river,” he said.

With the addition of over one tmcft each day for over a month now, the storage in the Kandaleru reservoir increased to 22.55 tmcft on Saturday.

“The discharge to Chennai is being maintained at about 1,500 cusecs from the reservoir since September 25,” Mr. Rao said.

As per the inter-State agreement, Chennai is entitled to 12 tmcft water in two spells, first during the southwest monsoon and second after the northeast monsoon.

“This year, Chennai can rely on water release in the second spell ahead of the 2020 summer, as the Kandeluru is expected to attain full capacity in one month,” Irrigation Department sources said.

AIR hopes to bring back charms of sport on air

The golden days of radio commentary may be long over in India, but the All India Radio (AIR) has come up with an initiative that could bring back some of the charms of the good old way of following live sport. The final of the Durand Cup football tournament, to be played between Mohun Bagan […]

4 BSF jawans killed in encounter with Naxals in Chhattisgarh