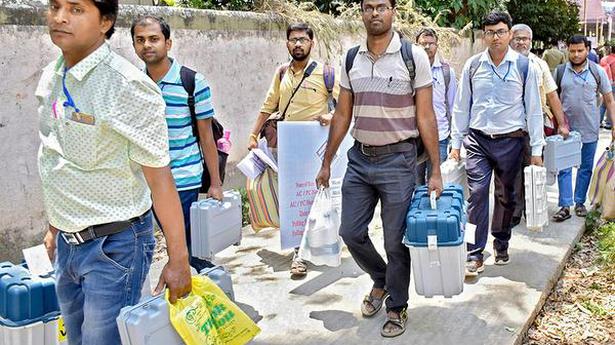 The Trinamool Congress has massively coordinated its pre-poll campaign to bag most of the seats that go to the polls on Tuesday. Not only has the party stepped up the number of rallies compared with last time, it has also engaged Suvendu Adhikari, their key election manager of south Bengal, in the north to enter the Congress’ bastion.

Three of the five seats in two central Bengal districts that go to the polls on the day were bagged by the Congress in the 2014 Lok Sabha poll, while the TMC got one in Uttar Dinajpur.

Meanwhile, TMC chief Mamata Banerjee has targeted the Election Commission’s special observer Ajay Nayak in the run-up to the third phase of polling, following his comments that the law and order situation in Bengal was worse than that in Bihar a decade ago.

More than 300 companies of central paramilitary forces will be deployed in 92% of the booths in the third phase. The deployment has sharply escalated from 274 companies in the second phase on April 18 and will continue to grow from now on, Mr. Nayak indicated.

Both had won by a narrow margin in 2014. However, Mr. Mukherjee has an advantage. Both the TMC and the BJP candidates are considered “weak” by the locals — the TMC candidate is not a professional politician and the BJP candidate was a CPI(M) MLA. “This gives him a chance,” said a local Congress activist.

Moreover, the Congress stalwart of Murshidabad district and MP Adhir Ranjan Chowdhury admitted that it was his “responsibility” to ensure Mr. Mukherkee’s victory. However, Mr. Mukherjee was rarely seen in the constituency, which is “a minus”, a local said.

Malda too has been a Congress bastion for many years and the party bagged both the seats — Malda North and Malda South — in 2014. However, Malda North MP of the Congress Mausam Noor is contesting on a TMC ticket, while the CPI(M) candidate in 2014 is a BJP candidate. The CPI(M) has not put up a candidate in Malda South, making it a reasonably easy contest for the sitting Congress MP Abu Hasem Khan Chowdhury.

However, TMC district president Moazzem Khan has emerged as a strong candidate in Malda South with the rise of the BJP.

The fifth seat is in the extreme north, where sitting TMC MP Arpita Ghosh is on a difficult wicket. A TMC leader said: “There is infighting as the TMC local leader Biplab Mitra was denied a ticket and Ms. Ghosh was not active in the constituency.” Moreover, the BJP has emerged as a strong force in Balurghat. The Arpita Ghosh camp, however, is confident of winning following Ms. Banerjee’s systematic campaigns.

A Special CBI court in Ahmedabad on May 2 discharged former police officers D.G. Vanzara and N.K. Amin in the case of killing of Ishrat Jahan and three others in an allegedly fake encounter. The court approved their pleas to drop proceedings against them on the ground that the Gujarat government has decided to not […]

GST Council may give 1-year extension to anti-profiteering authority

The GST Council is likely to extend till November 30, 2020 the tenure of the National Anti-profiteering Authority (NAA), which deals with customer complaints regarding not receiving tax cut benefits, at its next meeting on June 21, an official said. The Council at its 35th meeting, the first under new Finance Minister Nirmala Sitharaman, is […]