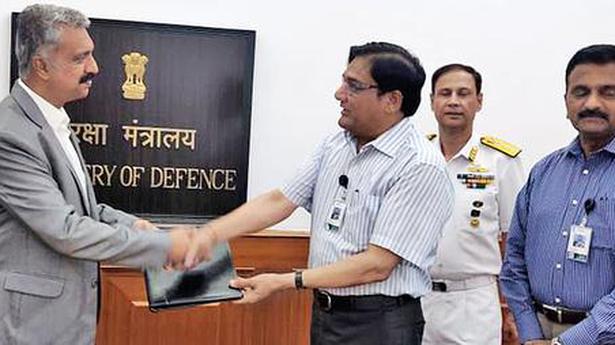 The public sector yard, which is building India’s first indigenous aircraft carrier, was the lowest bidder for the project.

According to the contract, the yard is to deliver the first ship within 42 months, while subsequent ships have to be delivered at the rate of two ships each year.

The project should be completed within 84 months. The ASW shallow water craft are designed for a deep displacement of about 750 tonnes, speed of 25 knots and complement of 57 personnel. The vessels will be capable of full scale subsurface surveillance of coastal waters and coordinated ASW operations with aircraft, said a communication from the yard. The vessels will also be capable of interdicting and destroying subsurface targets in coastal waters.

They can also be deployed for search and rescue by day and night in coastal areas. In their secondary role, they will be capable of prosecuting intruding aircraft, and lay mines on the seabed.

“The vessels will be equipped with highly advanced state-of-the-art integrated platform management systems including propulsion machinery, auxiliary machinery, power generation and distribution machinery and damage control machinery. The ASWSWC Corvettes are also being built in class standards, in addition to the owner specific requirements,” the release said.

The contract was signed when the yard is investing a total of ₹2,769 crore in building a new 310-metre long dry dock on its campus in Kochi and a shiplift based shiprepair yard on Willingdon Island, Kochi.

The indigenous aircraft carrier, INS Vikrant, is in an advanced stage of testing of systems.

The CSL is also building a Technology Demonstration Vessel for the DRDO and two 1200-passenger vessels and two 500-passenger vessels for the Andaman and Nicobar administration. This apart, it is constructing 27 small vessels for the Inland Waterways Authority of India (IWAI); the Kerala Fisheries Department; the Tamil Nadu government; and the Indian Navy. It has also won the contract for construction of four mini bulk carriers for Utkarsh Advisory Services Private Limited, Mumbai, and nine Floating Border Outpost Vessels for the Border Security Force (BSF).

On Monday evening, Aaditya Thackeray (29), Shiv Sena youth wing leader and son of party president Uddhav Thackeray, announced his intention to enter the poll fray in Maharashtra from the Worli Assembly constituency. With that, he became the first Thackeray in three generations to fight a direct election, a move that reflects the changes within […]

Four persons have been arrested on the charges of assaulting two Kashmiri men selling dry fruits on the roadside in Lucknow on Wednesday. The video of the assault went viral on social media prompting the Lucknow police to register a on late Wednesday evening. While one of the culprit, identified as Bajrang Sonkar was picked […]

The Supreme Court on October 21 stayed the criminal trial in the alleged sex CD case involving Chhattisgarh Chief Minister and senior Congress leader Bhupesh Baghel as an accused and sought his response on the CBI’s plea to transfer the matter out of the State. A Bench headed by Chief Justice Ranjan Gogoi was told […]