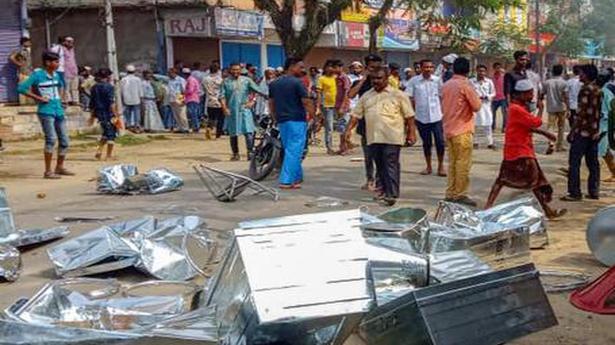 Curfew in violence- hit Hailakandi district of Assam was relaxed on Tuesday from 7 a.m. till midnight following improvement in the situation, an official order by the Deputy Commissioner, Keerthi Jalli, said here.

Night curfew, however, will remain in force for eight to 10 days.

Banks, markets, educational institutions and government offices remained open and public and private vehicles were seen plying on the roads during the relaxation period, officials added.

Internet service, which was suspended since Friday night following the unrest on that day, resumed on Tuesday morning.

In a letter addressed to the people, the Deputy Commissioner said “the need of the hour is to maintain peace and communal harmony as the district is going through a difficult phase”.

“I am aware that imposition of curfew has caused inconvenience to you. I promise you that it is a temporary measure and done to act as a deterrent to the anti-social elements,” she said. Urging people not to be swayed by emotions and not to believe all that is being circulated on social media, Ms. Jalli said, “I appeal to everyone to cross-check and verify the information with the district administration.”

One person was killed in police firing and 15 were injured in communal violence in Hailakandi on Friday.

The Assam government has instituted a one-man inquiry panel headed by Additional Chief Secretary Rajiv Kumar Bora to conduct a probe into the incident.

Six die as lorry and minivan collide in Anantapur

Six persons died, eight others grievously injured when a mini van and a container lorry collided head-on at Yerraguntlapalle village on Kadiri-Madanapalle highway in Anantapur district of Andhra Pradesh on Friday. Kadiri Circle Inspector of Police told The Hindu that the accident took place around 6.30 a.m. All the deceased and injured were passengers in […]

A mob attacked a man who had been one of the accused in the sensational Walayar rape and death case of two minor siblings, at Attappllam, near here, on Saturday. M. Madhu alias Kutty Madhu, 27, was thrashed by a group of people around 12 p.m. The police rescued and admitted him to the Government […]

Majority of the fresh cases are due to out of the State links; the total number of positive cases goes up to 2,205 Source: thehindu.com Related