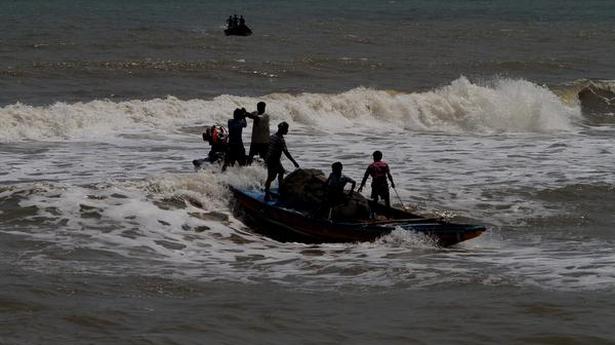 The Indian National Centre for Ocean Information Services (INCOIS) here, which is closely monitoring the Extremely Severe Cyclonic Storm “Fani” round the clock, has warned of likely damage to locations even far away along the east coast due to sustained high winds, storm surges and swell waves.

The cyclonic system has already crossed the deep sea buoy BD14, where wave heights went up to 3.9 metres, when the system crossed and as of now reduced (less than 2.5m). Deep sea buoy BD11 showed a maximum wave height of 6.8 m (forecast 7.7 m), this is likely to go up further on Wednesday. Deep sea buoy BD08 is also showing a distinct upward trend, so waves can go upto nearly 6m, in the next two days.

An upward trend in higher waves long the coastline has started registering at Visakhaptnam and Gopalpur. The nearshore waves are being measured using WAMAN (Wave Monitoring Along Near-shore) buoy network, with real-time communication of the data, deployed at Puducherry, Krishnapatnam, Visakhapatnam, Gopalpur and Digha, he said.

“Higher waves are likely to be experienced along the north AP coast, Odisha and West Bengal coast with maximum waves being along the Odisha coast. At Visakhapatnam, maximum wave height of around 5.8m is likely during early hours on May 2; at Gopalpur, around 8.7m, early afternoon of May 3 and at Digha around 5.4m, early morning of May 4. This is for locations where Wave Rider Buoys have been deployed,” explained Mr. Nair.

The system is likely to move northwestwards during next 12 hours and recurve north-northeastwards and cross the Odisha coast between Gopalpur and Chandbali, to the south of Puri around May 3 afternoon with maximum sustained wind of speed 175-185 kmph gusting to 205 kmph. The observations and forecast model outputs are in good agreement in the open ocean and near-shore. This suggests maximum caution to be exercised by Odisha, AP and West Bengal coasts, he maintained.

Warnings to fishermen in deep sea is being given through NAVIC gadget, developed by ISRO and INCOIS. Ships even 1500 km away can receive messages on cyclones and tsunamis, as well as information on high wave alerts and potential fishing zone advisories through this gadget unlike other modes of communication restricted to few tens of kilometers.

Simhachalam’s centuries-old inscriptions have a story to tell

The temple of Sri Varaha Lakshmi Narasimha Swamy, atop Simhachalam hill, is a treasure trove of 525 ancient inscriptions. The completion of 500 years of the visit of emperor Sri Krishnadevaraya of the Vijayanagara Empire to the temple was celebrated on March 29, 2016 based on the ‘danasasanam’ of that date. Similarly, another inscription donating […]