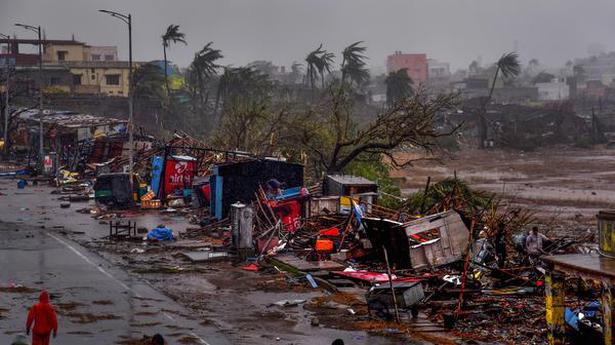 The Odisha government on Sunday announced additional one month quota of rice and ₹1000 to families affected by cyclone Fani, as the situation remained critical 48 hours after the storm made landfall in coastal Odisha.

“The district of Puri and parts of Khordha have been severely affected. For all families covered under food security, an additional one month quota of rice plus ₹1000 and polythene will be provided,” Chief Minister Naveen Patnaik said.

For Cuttack, Kendrapara and Jagatsinghpur districts, which were moderately affected, ₹500 and an additional one month quota of rice will be provided to people in these districts.

The houses completely damaged will be reconstructed under housing schemes expeditiously. Loss of agricultural and horticultural crops and animal fisheries will be assessed and compensated accordingly, Mr. Patnaik said, adding that the plantation will be taken up in mission mode soon after the relief and restoration.

The cries for water and power got shriller with the State government facing a huge task to restore normalcy.

Koraput villagers use own funds to construct irrigation system

The third global summit of Tamil entrepreneurs and professionals that will be organised in Chennai from November 14 to 16, by a private organisation – ‘The Rise’, will see the participation of Tamil entrepreneurs and professionals from over 30 countries, its founder Fr. Jegath Gaspar Raj claimed on Wednesday. According to him, transforming Tamil Nadu […]

Eighteen youths who had gone missing in thick forests displayed presence of mind by calling the ‘100’ helpline after which they were rescued by a special police team in Kadapa district on Wednesday. The youths, belonging to Kurnool district, started their trek from Allagadda on the night of December 10 via Ahobilam to reach Jyoti […]