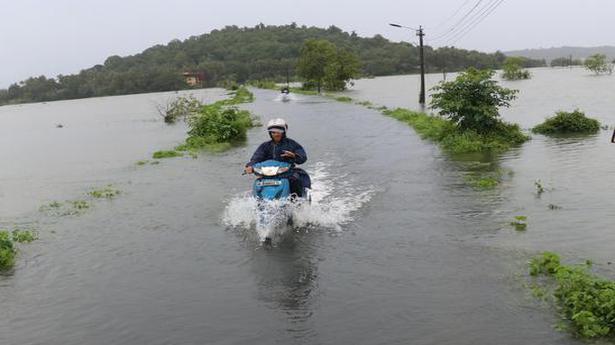 The cyclonic storm “Kyarr” is likely to bring very heavy to extremely heavy rains in coastal districts of Ratnagiri and Sindhudurg in Maharashtra in the next 12 hours and also cause strong winds, the Met office said on Friday.

The warning was issued this afternoon by the Mumbai centre of the India Meteorological Department (IMD).

The IMD’s Goa observatory also issued a fresh warning and advised tourists to stay indoors and asked fishermen to avoid venturing into the sea in view of bad weather conditions.

A deep depression in the Arabian Sea intensified into cyclonic storm ‘Kyarr’ during early hours of Friday.

‘Kyarr’ is very likely to intensify into a severe cyclonic storm during the next 12 hours and into a very severe one during the subsequent 24 hours, said an IMD official.

Subsequently, the cyclonic storm will move towards the coast of Oman, the IMD predicted.

A red alert, indicating ‘extremely heavy rainfall’, has been issued for Sindhudurg district, which would mean precipitation of 204.5 mm rainfall in 24 hours, it said.

Cyclone Kyarr would result into gale winds, reaching the speed to 85 kmph and by Saturday it would become 110 kmph, the IMD official said.

“Squally wind speed reaching 55-65 kmph gusting to 75 kmph is likely to prevail along and off Ratnagiri, Sindhudurg, Raigad districts of Maharashtra as well as Goa.

Wind speed of around 40-50 kmph gusting to 60 kmph is likely to prevail along the remaining coastal districts of Maharashtra, north Karnataka coast as well as in the Arabian sea off the Gujarat coast during the next 24 hours,” the official said.

Heavy rains continued to pound Goa for the third consecutive day on Friday, throwing life out of gear with no immediate respite in sight.

Several roads, including parts of the highway connecting Canacona to Margao in South Goa, were submerged.

A road at Gudi village in South Goa, 15 km from Margao, and several stretches in Verna Industrial Estate were waterlogged due to heavy downpour.

Water level of the Mandovi river has been rising, restricting the movement of people to and fro the islands of Chorao and Diwar, located across the river near Panaji, an official said.

Independence Day: Ladakh lives it up in its transition to Union Territory

Ladakh, which will become a Union Territory after the bifurcation of Jammu and Kashmir, celebrated Independence Day with fervour on Thursday, with local BJP MP Jamyang Tsering Namgyal saying the region has got “independence from Kashmir”. The parliamentarian, whose speech in the Lok Sabha after the abrogation of special status to Jammu and Kashmir drew […]

Top officials of the Environment Ministry, Delhi Development Authority and three Municipal Commissioners on Friday stayed away from a key meeting of a parliamentary panel on urban development that was to discuss the severe pollution levels in the Capital. Chairman of the committee and MP Jagdambika Pal, sources said, cut the meeting short due to […]