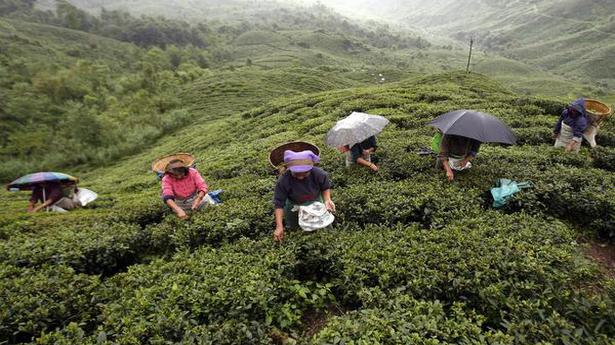 The West Bengal government and the Tea Planters’ Association of Darjeeling hills on Friday agreed to the demand of tea garden workers across 87 gardens in the Darjeeling hills for a 20% bonus. The decision was taken during a tripartite meeting at Kolkata’s New Secretariat Building where representatives of the workers’ union and planters’ association met Labour Minister Moloy Ghatak.

It was decided during the meeting that 60% of the bonus will be paid in the next 10 days and remaining 40% in the month of November. Earlier, on October 4, the tea garden workers had observed a 12- hour strike demanding 20% bonus.

After the agreement, representatives of the union agreed to restore normalcy in productivity with immediate effect. “It is a victory of the tea-garden workers. We should realise that tea is the backbone of the economy of Darjeeling and the interest of workers, who earn a meagre ₹176 a day, cannot be ignored,” Saman Pathak, general secretary of Centre for Indian Trade Unions of Darjeeling district, said. Mr. Pathak is also a member of the Joint Forum of different trade unions working in the tea gardens.

With the announcement of 20 % bonus, Gorkha Janamukti Morcha leader Binay Tamang, who had been on a hunger strike since October 6 over the demand, ended his protest.

“It is because of Binay Tamang that the workers of tea gardens in Darjeeling have got their due,” Mr. Tamang’s close aid and chairperson of Gorkhaland Territorial Association Anit Thapa said. Mr. Thapa said Mr. Tamang health had worsened and he was being taken to Siliguri for medical intervention.

Darjeeling BJP MP Raju Bista, in a statement, congratulated tea garden workers and demanded that Minimum Wages Act should be implemented in the tea gardens.

Japan may extend a special recruitment programme to the Northeast under which residents of the region will be offered nursing jobs in that country. This was conveyed by outgoing Ambassador of Japan Kenji Hiramatsu to Union Minister for Development of North Eastern Region (DoNER) Jitendra Singh here on Monday, an official statement said. During the […]

The State government on Tuesday flew a burns specialist doctor to Nagpur, where a college teacher from Wardha district who was set on fire by a stalker is battling for life. Home Minister Anil Deshmukh tweeted that Sunil Keswani, a specialist from the Navi Mumbai-based National Burns Centre, was accompanying him to Nagpur to supervise […]

Telangana govt to firm up alternative transport policy on Sunday

The Telangana State government will firm up an alternative transport policy at a high level meeting to be held on Sunday to review the RTC employees strike that began on Saturday. Transport Minister Puvvada Ajay Kumar in a statement released by the Chief Minister’s Office here on Saturday reiterated that if workers of RTC who […]