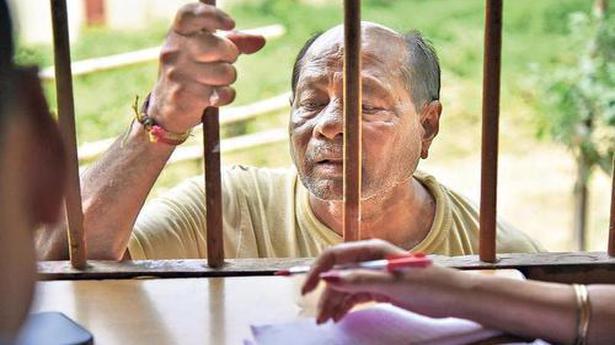 The National Human Rights Commission (NHRC) has registered a case involving the death of a 65-year-old man in detention as a declared ‘foreigner’ in Assam as members of his family refused to receive his body for the eighth day on October 20.

Dulal Paul, who required regular check-ups at a mental asylum, died of diabetes and renal complications at the Guwahati Medical College and Hospital on October 13 after undergoing treatment for 15 days. He was lodged at the Tezpur detention camp in north-central Assam on October 11, 2017, after a Foreigners’ Tribunal in Sonitpur district declared him a foreigner.

“I received an acknowledgement from NHRC on October 18 regarding registration of the case,” Guwahati-based activist Manas Roy said on Sunday.

“Dulal Paul was thrown to Tezpur detention camp in 2017 despite showing proof of Indian citizenship. He was denied proper medical treatment and subsequently died… His rights as a citizen of India were breached by the authority,” Mr. Roy’s complaint read.

Other organisations too have slammed the State government for a “serious error” leading to the death of Dulal, a resident of Alisinga village near Dhekiajuli town in Sonitpur district.

“He was a genuine Indian and the government was wrong in sending him to a detention centre. Since he was branded a foreigner through a legal process, the law says that the body should be sent to Bangladesh or whichever country he came from,” said Aabhijeet Sarma, chief of Assam Public Works, the NGO whose petition in the Supreme Court in 2009 resulted in the exercise to update the National Register of Citizens.

“This is a serious human rights issue and the government must fix responsibilities besides providing adequate compensation to the family. Many such Indians, whether Bengali, Bihari or Assamese, are languishing in the detention camps,” he said.

Assam Chief Minister Sarbananda Sonowal has promised to visit Dulal’s family in Alisinga after his body is cremated. The family has refused to accept his body for the eighth day on Sunday, maintaining that the government has to first declare him an Indian.

On Saturday evening, Mr. Sonowal told a delegation of the All Assam Bengali Youth Students’ Federation that it was impossible for his government to declare Dulal an Indian as the Gauhati High Court had upheld the Foreigners’ Tribunal’s judgement against him.

“But the Chief Minister offered legal aid if the family moves an application in the Supreme Court seeking restoration of his Indian status,” said Forest Minister Parimal Sukhabaidya, who had accompanied the delegation.

Telangana chief minister K. Chandrashekar Rao’s (KCR) current mantra is cooperative federalism. He believes the one-size-fits-all theory pushed by central governments is not working, and that states have to be equal partners. The country can’t afford to waste enormous resources on inefficient institutions and processes when the immediate need is to maximise growth, says KCR. […]

K.S. Eshwarappa, Minister for Rural Development and Panchayat Raj, has said that, in the wake of the prevailing COVID-19 situation, the Election Commission has been requested to postpone the election for gram panchayats in Karnataka scheduled to be held in the month of May. He told presspersons here on Monday that the preparations for the […]