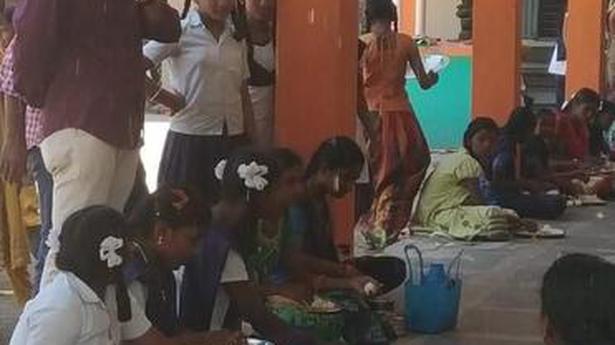 Students vie with each other to stand first in the queue to partake the noon meal prepared in their school.

The reason is that those who join the queue late will have to forgo eggs and dal. Lunch prepared by the school in a State-run school at Addanki was sufficient for just 70 students, but as many 110 students ate it. This came to light during a raid conducted by sleuths of the Vigilance and Enforcement Department, said Regional Vigilance and Enforcement Officer M. Rajani.

The situation was no better in 14 other State-run schools inspected by the team led by Ms. Rajani. Rats made merry as the rice and provisions were stored in classrooms.

Another glaring lapse noted was that the stocks and attendance registers were not maintained properly, she said, adding that shortage of 50 kg of rice was noted in a girls school there, where lunch was served for only 125 students while 464 students studied in the school.

Only four toilets were there in the school.

She said she would submit a detailed report to the department Director General(DG), recommending for disciplinary action against the headmasters and other staff concerned as the government made budgetary allocation to serve mid-day meal for all the students. Though it was mandatory on the part of the school authorities to provide noon meal to each and every student it was found that only 35 to 40% of the funds earmarked had been spent on the students and the rest diverted, she noted.

Much-needed monitoring by district and mandal-level officials of the Education Department was lacking leading to misuse of the funds, she observed.

Parents of the wards should also be more proactive in questioning the school authorities so that the situation changed for the better. As many as 2.08 lakh of the 2.78 lakh students enrolled eat noon meal in State-run schools and an allocation of ₹40 crore was made for the purpose.

Accused held for extortion involved in cases in Kerala: police

Five men from Palakkad, Kerala, who were arrested for abduction and extorting money from a garment businessman after luring him with a woman near Valparai, were involved in similar cases in Kerala, police said. On Friday, the Aliyar police arrested Senthilkumar, 56, Kamaal, 51, Sathish, 31 and Ajayan, 38 and a woman named Sudha, 30 […]

Seized cash does not belong to AMMK, says Thanga Tamilselvan

Even as the Income Tax department claimed that it seized ₹1.48 crore from the premises of an Amma Makkal Munnetra Kazhagam (AMMK) functionary at Andipatti, Theni, party member Thanga Tamilselvan said on Wednesday that it was a drama enacted by Deputy Chief Minister O. Panneerselvam. B. Murali Kumar, DGIT (INV), Chennai, said, “Last night’s searches […]

HYDERABAD Saralasagar, a minor irrigation project in Wanaparthy district in Telangana had suffered a major breach on its earthen bund in the early hours of Tuesday emptying it completely. About 0.5 tmc ft of water – its full storage capacity – drained out due to the breach. According to Irrigation Department officials, a piping was […]