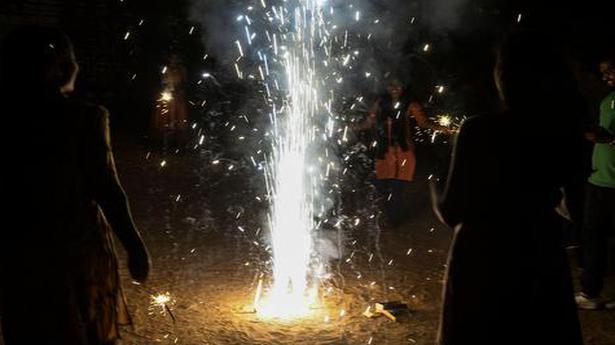 It was a cracker of a Deepavali on Saturday night in Hyderabad as the citizens celebrated the festival of lights with gusto. The last-minute easing of a ban on crackers helped.

The two-hour time band and the limited use of green crackers was observed more in the breach as youngsters started lighting up right from 6 p.m. and stretched to beyond 10 p.m. permitted by the Supreme Court.

The bursting of crackers saw a sharp spike in pollution levels across the city changing the levels from moderate to unhealthy for sensitive groups. The air had a sulphurous acrid tinge by 9 p.m. in many residential areas and apartment complexes throughout the city. Sanathnagar was the worst affected as superfine particulate matter pollution of PM2.5 topped 574 ug/m3 at 10.30 p.m. It was nearly 10 times the ambient air quality standard of 40-60 ug/m3 set by the Central Pollution Control Board. By 11 p.m., the PM2.5 levels dipped to 366 ug/m3. However, the sulphur dioxide, nitrogen dioxide and other hazardous pollutants remained at the normal level. A lower than normal wind speed of 10.8 km per hour aggravated the pollution levels.

Citizens who took to social media to raise the issue of bursting of crackers beyond the time band and the decibel level had to face vile trolling.

The thick grey streaks on his faux hawk hairstyle and a slight paunch are tell-tale signs of ageing. But for Inivalappil Mani Vijayan, Kerala’s most celebrated footballer, who turned 50 on Thursday, age is just a number. And for him there is no life away from the beautiful game as he continues to defy the […]

The High Court of Karnataka on Wednesday said that the Belagavi police should take action against those who illegally obstruct Karnataka Rajyotsava celebrations on November 1 using weapons or otherwise, and register cases against those indulging in illegal activities. A Division Bench comprising Chief Justice Abhay Shreeniwas Oka and Justice S.R. Krishna Kumar issued the […]