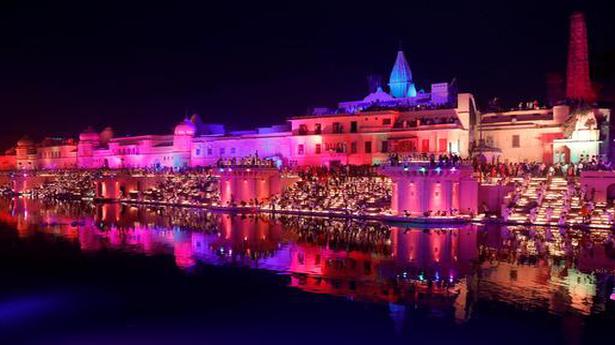 The Uttar Pradesh government has granted the status of State fair to the Deepotsav Mela to be held in Ayodhya during Deepavali.

The Cabinet met here on Tuesday and took the decision.

The festival, in which over 5.5 lakh lamps will lit on October 26, will be held at an estimated cost of ₹133 crore, government spokesperson Shrikant Sharma said.

With the change in its status, the Mela will now be planned by the District Magistrate of Ayodhya. Earlier, the Tourism Department organised it.

Th decision was taken given the “international status” of the festival and on the proposals sent by the District Magistrate in letters, dated January 15 and July 3, the government said. To prevent the misuse of funds, all the events related to the festival would be audited.

The BJP government plans to organise a grand Deepavali celebration in Ayodhy. Last year, the festival showcased the Korean connection to the town, and South Korea’s first lady Kim Jung-sook was the chief guest.

Restrictions under Section 144 have been imposed on Ayodhya until December 10 in anticipation of the Supreme Court’s verdict in the Ram Janmabhoomi case.

Nalini Sriharan, a life convict in the Rajiv Gandhi Assassination case, Tuesday approached the Madras High Court seeking its permission for her personal appearance before the court to argue on a petition seeking leave to make arrangements for her daughter’s marriage. Nalini filed a habeas corpus petition stating that she had not availed of any […]

Now, Pragya Singh Thakur seeks apology from those who ‘tortured’ her

Facing flak for her remarks against the then Maharashtra ATS chief Hemant Karkare, Malegaon blast accused and BJP candidate Pragya Singh Thakur demanded an apology on Saturday from those who “tortured” her for “nine years.” Pragya had apologised on Friday after her statement that Karkare died in the 26/11 terror attack because she had “cursed” […]

Indian leaders visit Arunachal Pradesh in the way they visit any other part of India, said the Ministry of External Affairs in response to China’s objection to Home Minister Amit Shah’s visit to the Himalayan state. “Our position on Arunachal Pradesh is clear and consistent. It is an integral and inalienable part of India. Objecting […]