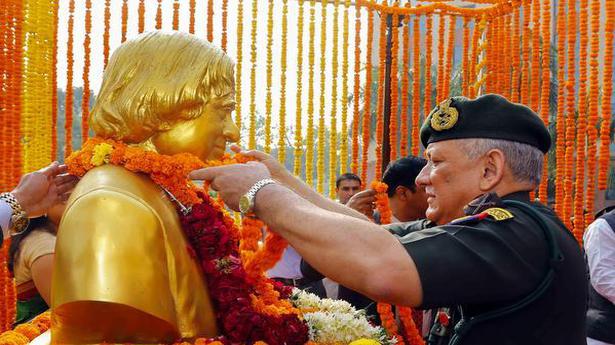 Defence exports will be tripled to ₹35,000 crore by 2024, Army Chief Gen. Bipin Rawat said on Friday while stating that the government was trying to further “lower bureaucratic barriers“ and simplify procedures to promote domestic defence manufacturing.

“We are manufacturing weapons and ammunition not just to arm our defence forces but now we are gradually becoming an export-oriented industry. Our defence exports currently range just about ₹11,000 crore annually and are set to grow to ₹35,000 crore by 2024,” Gen. Rawat said speaking at the 4th Defence Attaches conclave jointly organised by the Defence Ministry and news portal Bharat Shakti.

In this regard, he said that they were trying to “lower bureaucratic barriers further while reducing processes and focusing resolutely on the outcome of these processes.”

Talking of Def Expo 2020 to be held in Lucknow, Gen. Rawat said several new technologies would be on display and added, “We will be coming forward to certify some of the equipment on display.”

Speaking at the conclave, Vice-Chief of Army Staff Lt. Gen. M.M. Naravane said that Indian officers posted as Defence Attaches abroad “have been tasked to interact and advertise with host countries of the Indian equipment available.”

Navy Chief Admiral Karambir Singh spoke of the foreign cooperation initiatives which include capacity building, training, exchanges and joint exercises. “India is hosting a large multilateral exercise MILAN 2020 at Visakhapatnam and we have invited 41 countries,” he said.

Rear Admiral Atul Anand, Head of Foreign Cooperation and Intelligence said that so far about 25 countries had confirmed their participation in the exercise. “It will be a week-long exercise,” he added.

A Delhi court on Friday issued non-bailable warrant (NBW) against businessman Ratul Puri, nephew of Madhya Pradesh Chief Minister Kamal Nath, in connection with a money laundering case related to the AgustaWestland chopper scam. Special Judge Arvind Kumar issued a NBW against Mr. Puri as was sought by the Enforcement Directorate on Wednesday. ED had […]

Minister for municipal administration C.S. Shivalli suffered a massive heart attack on Friday. He was rushed to a private hospital in Hubballi and is being treated. His condition is said to be critical. Mr. Shivalli had undergone heart surgery earlier. For the past three days, he was at the building collapse site in Dharwad monitoring […]

Union Minister Nitin Gadkari’s absence from the Bharatiya Janata Party’s (BJP) State executive meeting, which was attended by the party’s working president, J.P. Nadda, raised eyebrows. Sources close to Mr. Gadkari said he had a programme to attend in Nagpur, which could not be cancelled, and the party was informed about his inability to attend […]