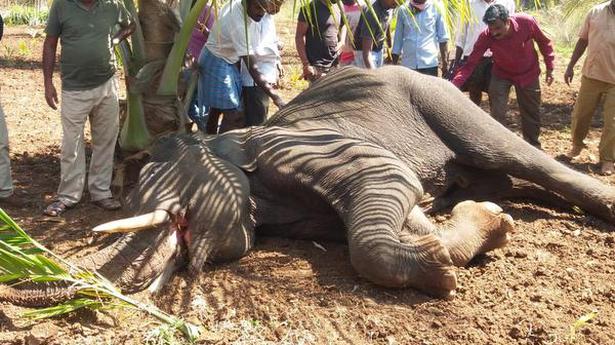 A wild tusker, which was in a village farm near Gurupura in Hunsur, is battling for its life after collapsing owing to suspected dehydration and stomach infection.

It was initially speculated that the elephant, believed to be around 15 years, suffered electric shock on coming in contact with a live wire and collapsed. But veterinarian Mujib, who treated it, dismissed the possibility.

Dung examination indicated that the elephant was suffering from dysentery; the stomach was infected, possibly on account of drinking contaminated water or consuming agricultural produce in fields sprayed with chemicals, said Dr. Mujib.

The elephant mustered enough strength to haul itself up and walk for nearly 100 metres, but collapsed again owing to stress induced by the commotion of locals gathering at the farm, he added.

“A second round of treatment commenced, but the elephant was slow in responding this time around,” Dr. Mujib said, expressing doubt about the tusker’s chance of survival. The area is close to Veeranahosahalli range of Nagarahole National Park, but the elephant is outside the forest boundary. A team of Forest Department officials are at the spot and will keep vigil while the veterinarian monitors the elephant’s condition.

Besides investments in and around Bengaluru, many industrial areas in north Karnataka are attracting investments: Shettar Source: thehindu.com Related